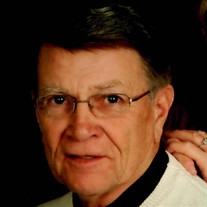 Jack L. Callen, 78, of Mayport, Limestone Twp., passed away unexpectedly early Friday morning, October 19, 2018 at his home. He was born on August 4, 1940 in Sigel; son of the late William A. Callen and Catherine Kerr Dodson. Jack was married on April 25, 1959 to Joan Bowersox, whom survives. He retired from Penelec, Piney Dam after 35 years and also drove school bus for Clarion Limestone for a number of years and helped Rankin Auctioneers. Jack was currently a Limestone Twp. Supervisor. Jack was a member of the First Baptist Church in Clarion, where he was also a Trustee. Jack loved spending time with his grandchildren, and going to their sporting events. He enjoyed rebuilding tractors, riding his bicycle, fishing, and loved to laugh. Jack always took good care of his family. He is survived by his wife, four children, Rodney Callen of Fairmount City, Karla Callen of Clarion, Kristin Stiglitz of Fairmount City, and Randy Callen and his wife Heidi of Mayport, and nine grandchildren, Leah Baker, Christopher Callen Deal, Rachael and Ruby Callen, Kolton Stiglitz, and Daniel, Ian, Hayden, and Jack Callen. Jack is also survived by his siblings, William Callen and his wife Ruth of California, Mary Ames of Mayport, and Barb LaFond of Brookville. He was preceded in death by his parents and an infant granddaughter, Lauren Stiglitz. Jack’s family will receive friends from 1.p.m. to 3 p.m. and 5 p.m. to 7 p.m. on Sunday, October 21, 2018 at the Robert V. Burns Funeral Home in Clarion. Additional visitation will be held from 10 a.m. to 11 a.m. at the First Baptist Church in Clarion on October 22, 2018, where Funeral Services will follow at 11 a.m. with Rev. Jason Hunter, pastor presiding. Interment will be held in the Salem Cemetery. In Lieu of flowers, donations can be made to the Limestone Volunteer Fire Department or the First Baptist Church of Clarion.

Jack L. Callen, 78, of Mayport, Limestone Twp., passed away unexpectedly early Friday morning, October 19, 2018 at his home. He was born on August 4, 1940 in Sigel; son of the late William A. Callen and Catherine Kerr Dodson. Jack was married... View Obituary & Service Information

The family of Jack L. Callen created this Life Tributes page to make it easy to share your memories.

Send flowers to the Callen family.