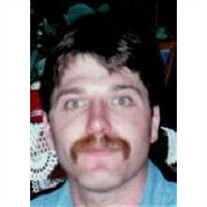 Jack E. Grant, 43, of 12229 Route 66, Clarion, died unexpectedly due to an emergency appendectomy on Monday, January 17, 2011, at Clarion Hospital. Born February 2, 1967, in Clarion, he was the son of the late Nolan LaVern Grant and Deloris Stauffer Grant of Clarion. Mr. Grant was a 1986 graduate of Clarion Area High School. A veteran, he served in the Navy from 1990 to 1994 during the Persian Gulf War. Mr. Grant was married on June 28, 1997 to the former Peggy L. Seigworth, and she survives. He enjoyed hunting, wood working, and spending time with his kids. In addition to his mother and wife, he is survived by two sons, Toby L. Grant and Tyler A. Grant, both at home; mother-in-law, Barb J. Seigworth of Knox; four siblings, Valerie Grant of Lake Lucy, Bradley Grant of Clarion, Phillip Grant of Clarion, and twin, Joe Grant of Limestone; close family friend, Viv Aaron of Clarion; sister-in-laws, Cindy Seigworth of Knox, and Jackie Dilley of Titusville; and a number of nieces and nephews. He was preceded in death by his father; one sister, Carrie Sue Grant Devine; and maternal grandparents, Clarence and Alberta Stauffer; and paternal grandparents, Emma and Dale Stewart; and James L. and Anna Mae Grant. Family will receive friends from 2 to 4 p.m. and 7 to 9 p.m. on Thursday, January 20, 2011, at the Robert V. Burns Funeral Home, 638 Wood Street, Clarion. Military honors will be accorded by American Legion Post #66 at 10:45 a.m. on Friday, January 21, 2011, in the funeral home. Funeral services will be held at 11 a.m. on Friday, January 21, 2011, in the funeral home with Rev. Mark Smith, pastor of the Church of Nazarene in Clarion, officiating. Interment will be held in the Licking Presbyterian Cemetery in Curllsville.  In lieu of flowers, donations can be made to Mr. Grant’s sons, Toby and Tyler.

Jack E. Grant, 43, of 12229 Route 66, Clarion, died unexpectedly due to an emergency appendectomy on Monday, January 17, 2011, at Clarion Hospital. Born February 2, 1967, in Clarion, he was the son of the late Nolan LaVern Grant and Deloris... View Obituary & Service Information

The family of Jack E. Grant created this Life Tributes page to make it easy to share your memories.

Send flowers to the Grant family.