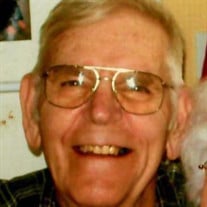 Jack Barton Staley, 92, of Clarion, passed away on Tuesday, February 23, 2021 at the UPMC Mercy Hospital in Pittsburgh. He was born on September 2, 1928 in Gas City, Indiana; son of the late Lewis and Charlotte Barton Staley. Jack graduated from Clarion Area High School in 1946 and then proudly served in the US Navy. He married the former Thelma Williams, who preceded him in death. Jack then married the former Lucy DeArment on July 12, 1980, who survives. He worked at Owens Illinois Glass Plant in Clarion for over forty-two years, retiring in 1993 and was also a member of the Quarter Century Club. Jack attended the Asbury United Methodist Church in Strattanville and was a member of the Moose Lodge #101, American Legion Post #066, and the V.F.W #2145, all of Clarion. He enjoyed family reunions and spending time with his family and friends. Jack is survived by his loving wife, Lucy of 40 years; his children, Kandi Tharp and her husband, Danny, of Clarion, Rona Lou Schake and her husband, Mel, of Brush Valley, Rick Staley and his wife, Cindy, of Miola; Linda Bauer and her husband, Steve, of Texas, Beverly Cassone of Tennessee, Terry Swartzlander and his wife, Sharon, of North Carolina, Julie Novak and her husband, Tony, of North Carolina, and John Swartzlander and his wife, Lynn, of Virginia; a daughter-in-law, Tonya Swartzlander of Clarion; twenty-three grandchildren; and thirty-three great grandchildren. Jack is also survived by his sister, Doris Grothenthaler and her husband, Chuck, of Chambersburg; his brother, Lowell Staley of North Carolina; a sister-in-law, Carol Staley of Farrell; and numerous nieces and nephews. He was preceded in death by his parents; his first wife, Thelma; two sons, Jack Staley and Charles Swartzlander; his sister, Lena Herron; and two brothers, Joe and Larry Staley. The family will receive friends from 11 a.m. to 1 p.m. on Saturday, February 27, 2021 at the Robert V. Burns Funeral Home in Clarion with Military Honors to be accorded at 1:15 p.m. by the American Legion Post #066 of Clarion. Funeral services will follow in the funeral home with Rev. Jeffrey Foor, pastor of the Asbury United Methodist Church. Social distancing protocols will be in place and masks are required. Interment will take place in the Cedarview Memorial Park in Strattanville. In lieu of flowers, Memorials or donations can be made in Jack’s name to the Asbury United Methodist Church, PO Box 96, Strattanville, PA 16258.

Jack Barton Staley, 92, of Clarion, passed away on Tuesday, February 23, 2021 at the UPMC Mercy Hospital in Pittsburgh. He was born on September 2, 1928 in Gas City, Indiana; son of the late Lewis and Charlotte Barton Staley. Jack graduated... View Obituary & Service Information

The family of Jack B. Staley created this Life Tributes page to make it easy to share your memories.

Jack Barton Staley, 92, of Clarion, passed away on Tuesday, February...

Send flowers to the Staley family.