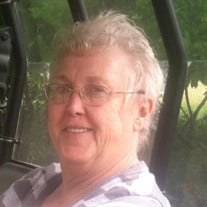 Jackie LaRue Cooney, 69, of Fisher, passed away early Sunday morning, November 1, 2020 at the UPMC Northwest Hospital in Seneca following a courageous battle with Cancer. She was born on January 28, 1951 in Clarion; daughter of the late Dale “Jack” and Thelma L. Wenner Stewart. Jackie graduated from the Clarion Limestone High School in 1968 and then graduated from the Dubois Business College with a Business Degree. She married Chris Cooney on November 11, 1971, who survives. Jackie started working for the Postal Service in 1976, retiring in 2019 as a Post Master. She was also the third generation to own and operate Stewart’s General Store in Fisher, which was also her homestead. Jackie was actively involved with the Millcreek Township Volunteer Fire Department, where she was Chief and also a first responder and an EMT. Jackie enjoyed mowing grass, riding her side-by-side, and helping with community events. She also liked Corvettes and owned five throughout the years. Most of all, Jackie loved spending time with her grandchildren. She is survived by her husband: Chris of Fisher; her daughter: Christie Stitt and her husband, Mitch, of Lucinda; and her grandchildren: Blaine, Waylon, and Emmalee Burkett, and Alex and Anna Stitt. Jackie is also survived by her sister: Nancy Sipes and her husband, Ralph, of North Huntington; numerous nieces, nephews, cousins, and an aunt: Delores Wenner. She was preceded in death by her parents: Dale “Jack” and Thelma Stewart and her sister: Linda McMaster. The family will receive friends from 4 p.m. to 8 p.m. on Wednesday, November 4, 2020 at the Robert V. Burns Funeral Home in Clarion. A celebration of Jackie’s life will be held at a later date. In lieu of flowers, Memorials or donations can be made in Jackie’s name to the Millcreek Township Volunteer Fire Department, P.O. Box 71, Fisher, PA 16225.

Jackie LaRue Cooney, 69, of Fisher, passed away early Sunday morning, November 1, 2020 at the UPMC Northwest Hospital in Seneca following a courageous battle with Cancer. She was born on January 28, 1951 in Clarion; daughter of the late Dale... View Obituary & Service Information

The family of Jackie L. Cooney created this Life Tributes page to make it easy to share your memories.

Send flowers to the Cooney family.