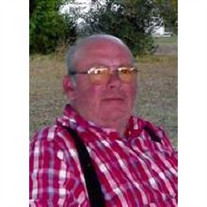 James L. Farley, 72, of Silver Lane, Clarion, died unexpectedly Wednesday, August 21, 2013, at the Brookville Hospital. Born August 2, 1941 in Limestone Twp.; he was the son of the late Junior and Faye Henry Farley. He was married on June 16, 1962 to the former Millie Monrean, and she survives. James was a welder by trade.  He worked at the Owens-Illinois Glass Plant in Clarion, retiring after 37 ½ years.  He enjoyed hunting, fishing, guns, and hanging out with his farm and at the B & W Smith’s shop.  He also enjoyed restoring old tractors, spending his winters in Florida, and spending time with his dog, Sidney Jane. In addition to his wife, he is survived by a daughter, Karen Smith and her husband, Willie, of Fisher; a son, Jasper Farley of Clarion; a granddaughter, Kate Burnham of Fisher; and three step grandchildren, Mark Smith and his wife, Nancy, of Harrisburg, Mike Smith and his wife, Angie, of Limestone, and Brad Smith and his wife, Tammy, of Clarion. Also surviving is a brother, John Farley and his wife, Marilyn, of Summerville; and a number of nieces and nephews. He was preceded in death by his parents and two sisters, Patty Coffman and Catherine “Rosie” Magness. Family will receive friends from 2 to 4 p.m. and 7 to 9 p.m. on Sunday, August 25, 2013, at the Robert V. Burns Funeral Home, 638 Wood Street, Clarion. Funeral services will be held at 11 a.m. on Monday, August 26, 2013, in the funeral home with special family friend, Tom Smith, of the Tom Smith’s Singing Ministries of Everett, officiating. Interment will be held in the Cedarview Memorial Park in Strattanville.

James L. Farley, 72, of Silver Lane, Clarion, died unexpectedly Wednesday, August 21, 2013, at the Brookville Hospital. Born August 2, 1941 in Limestone Twp.; he was the son of the late Junior and Faye Henry Farley. He was married on June... View Obituary & Service Information

The family of James L. Farley created this Life Tributes page to make it easy to share your memories.

Send flowers to the Farley family.