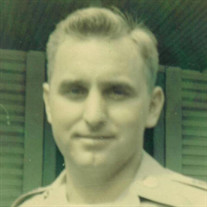 James E. Ferringer, 80, of Clarion, passed away unexpectedly of natural causes on Saturday, November 27, 2021 at his home. He was born on March 7, 1941 in Sligo; son of the late Noble and Elizabeth Edinger Ferringer. James attended the Sligo-Union High School and graduated from the New Castle School of Trades. He married the love of his life, Charlotte Prokop, on October 26, 1963 in Ellwood City; who survives. James worked at Babcock & Wilcox Steel Mill from 1965 to 1988 and then in the maintenance department at the Cook Forest State Park until he retired in 2003. He proudly served in the US Army from 1966 to 1968, first being stationed in Ft. Benning, GA. James then went into the Air Frame Repair Training in Newport News, VA and then in 1968, he was stationed in Cu Chi during Vietnam. James attended the Cornerstone Church of Clarion. James enjoyed hunting, fishing, carpentry, gardening, and spending time with his family, especially his grandchildren. He is survived by his beloved wife, Charlotte of 58 years; his two sons, Erik Ferringer and his wife, Helen, of Wampum and Jason Ferringer and his wife, Monica, of Venus; four grandchildren, Elijah Ferringer of Wampum, Emma Ferringer Telshaw and her husband, Devin, of Hillsville, and Ava Ferringer and Ayanna Ferringer, both of Venus. James is also survived by five sisters; three brothers; and numerous nieces and nephews. In addition to his parents, James was preceded in death by his two grandchildren, Brielle Ferringer and Baby Ferringer; two brothers, Daniel Ferringer and Larry Ferringer; and a sister, Ellen Shick. The Robert V. Burns Funeral Home in Clarion is handling the arrangements. Per James’ wishes there will be no services. In lieu of flowers, the family suggests donations or memorials can be made in James’ honor to the Cornerstone Church of Clarion, 3655 East End Road, Shippenville, PA 16254, or to the Roseville Independent Chapel, 3598 Route 322, Brookville, PA 15825.

James E. Ferringer, 80, of Clarion, passed away unexpectedly of natural causes on Saturday, November 27, 2021 at his home. He was born on March 7, 1941 in Sligo; son of the late Noble and Elizabeth Edinger Ferringer. James attended the Sligo-Union... View Obituary & Service Information

The family of James E. Ferringer created this Life Tributes page to make it easy to share your memories.

Send flowers to the Ferringer family.