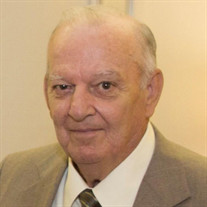 James T. “Jim” Freedline, 80, of Clarion, passed away early Saturday morning, April 3, 2021 at his home. He was born on July 25, 1940 in Alcola; son of the late Clarence and Cleo Bowser Freedline. Jim proudly served his country in the US Army. He married the former Susan Williams in October of 1963, who survives. Jim was a member of the Local 66 Operating Engineers. You could always find Jim out fishing. He also enjoyed spending time with his family. Jim is survived by his loving wife, Susan of 57 years; his daughter, Melissa Kimmell and her husband, Chuck, of Clarion; a granddaughter, Maggie Gronsky and her husband, Chris, of Pittsburgh; and a great-granddaughter, Savannah Gronsky, also of Pittsburgh. He is also survived by his three sisters, Shirley Campbell of Ohio, Donna Smith of Alcola, and Carol Yeany and her husband, Terry, of Fairmount City; and numerous nieces and nephews. Jim was preceded in death by his parents; a sister, Beverly Minich; a brother, Johnny Freedline; and three brothers-in-law. The Robert V. Burns Funeral Home in Clarion is handling the arrangements. At Jim’s request, there will be no public visitation. A memorial service will be held at a later date.

The family of James T. Freedline created this Life Tributes page to make it easy to share your memories.

Send flowers to the Freedline family.