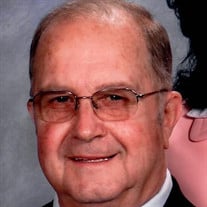 James “Jim” Kerle, 81, of Rehobeth Church Road, Clarion, passed away Saturday evening, October 19, 2019 at the Allegheny General Hospital in Pittsburgh surrounded by his family. He was born on January 2, 1938 in Clarion; son of the late Joseph and Agnes Schill Kerle. Jim was married to Judith Dunkle on August 30, 1958; whom preceded him in death on September 29, 1975. He then married Martha McCleary on September 14, 1979; whom preceded him in death on February 1, 2019. Jim was the CEO of Kerle Tire Company, Inc. in Clarion, where he worked seven days a week. He was a member of the Immaculate Conception Catholic Church of Clarion. Jim was also a member of the Clarion Moose Lodge #101 and Clarion Fraternal Order of Eagles #3807. He enjoyed watching NASCAR and Western movies, his cats, riding his bike, bowling, and spending time with his grandchildren and family. He is survived by his two sons: Daniel Kerle and his companion Bridget Wingard of Strattanville and Lee Kerle and his wife Melissa of Clarion; his son-in-law: Daniel Rhoades of Clarion; his step-son: Clayton Kroh and his wife Kimberly of Clarion; his step-daughter: Lori Klepfer and her husband Rodney of New Bethlehem; and ten grandchildren: Melani Marshall and her husband Jesse, Ashley Means and her husband Jacob, Amanda Kroh, Leah Kerle and her fiancé Giorgio Neiswonger, Kortnee Klepfer, Brent Rhoades, Cody Kerle, Joseph Kerle, James Kerle, and Kyle Kerle. Jim is also survived by his siblings: John Kerle and his wife Kate of Knox, Doris Callen and her husband Butch of Florida, and Jerome Kerle and his wife Jan of Florida; and numerous nieces and nephews. He was preceded in death by his parents; both wives; a daughter: Stephanie Rhoades; two sisters: Anne Kerle and Mary Lou Ball; and a brother: Joseph Kerle. The family will receive friends from 4 p.m. to 8 p.m. on Wednesday, October 23, 2019 at the Robert V. Burns Funeral Home in Clarion. A Christian Wake Service will be held at 3:30 p.m. in the funeral home. Mass of Christian Burial will be celebrated at 11 a.m. on Thursday, October 24, 2019 at the Immaculate Conception Catholic Church with Rev. Monty Sayers presiding. Entombment will follow at the Immaculate Conception Mausoleum. In lieu of flowers, donations or memorials can be sent in James’ name to Charitable Deeds and Services in Knox, 260 High Point Road, Knox PA 16232.

James &#8220;Jim&#8221; Kerle, 81, of Rehobeth Church Road, Clarion, passed away Saturday evening, October 19, 2019 at the Allegheny General Hospital in Pittsburgh surrounded by his family. He was born on January 2, 1938 in Clarion; son of... View Obituary & Service Information

The family of James F. Kerle created this Life Tributes page to make it easy to share your memories.