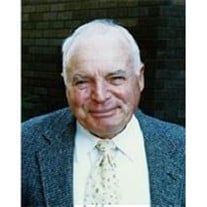 James P. McCann, 92 of Clarion, died peacefully at home Tuesday Morning, December 24, 2013.  He was born March 28, 1921, in Philadelphia, PA.  He was the son of the late John A. McCann and Susan (Duffey) McCann.  He attended St. Matthew’s grade and high schools in Conshohocken, PA. During World War II, he served with the Eighth Air Force, 447th Division in England as Radio Operator and Gunner on a B-17.  After the war he graduated from St. Louis University with a degree in Business Administration. Regardless of where he lived, Jim was very active in the church.  He would pay weekly visits to the sick in their home, was alter server for daily and funeral masses, when needed and was Eucharist Minister to the sick. Jim served as a Cub Scout Master while at St. Matthew’s Parish for 10 years where he taught Rifle and Bow & Arrow safety and a councilman for 3 years.  In Clarion, he served as Committeeman for Limestone Township for 15 years and 7 years on the Clarion Democratic Executive Board and was a member of the Limestone Fire Company for 15 years and a member of the N.R.A. He was a member of Immaculate Conception Church in Clarion and also the Knights of Columbus. In the Industrial world, Mr. McCann worked for the GE Co. and Boeing, as a technical writer.  He finished his career as a technical writer at the Philadelphia Naval Shipyard writing technical manuals for the Navy enabling sailors to repair, maintain, and operate equipment at sea. Jim is survived by his wife Nancy Miller McCann whom he married July 1986 at St. Nicholas Church, Officiated by Rev. J. Thomas Dugan, also surviving is his twin brother John of Lansdale, PA. and numerous nieces, nephews and grand- nieces and nephews. He was preceded in death by a sister Mary Perso and sister-in-law Mary McCann Jim’s niece wrote this to him in a letter in 2003, “Your life is a culmination of a tapestry of kind actions that help heal an ailing world.  If only we could all see Christ through your eyes we could realize the tenderness and unconditional capacity of God’s love.” Visitation will be Friday from 2 to 4 & 6 to 8 at the Robert V. Burns Funeral Home in Clarion where a Christian wake service will be held at 7:30pm. Mass of Christian Burial will be celebrated on Saturday at 11am at the Immaculate Conception Church in Clarion with the Rev. Monty Sayers Pastor as Celebrant. Internment will be in the St. Nicholas Church Cemetery in Crates. Memorials and donations can be made to Charitable Deeds & Services, 98 Hickory Nut Lane, Knox, PA  16232 Visitation will be Friday from 2 to 4 p.m. and 6 to 8 p.m.. Mass of Christian Burial will be celebrated on Saturday at 11am at the Immaculate Conception Church in Clarion.

The family of James P. McCann created this Life Tributes page to make it easy to share your memories.

Send flowers to the McCann family.