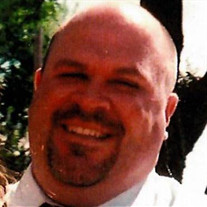 Jason W. Best, 47, of New Bethlehem, passed away Thursday evening, December 26, 2019 at the Clarion Hospital. He was born on April 17, 1972 in Brookville; son of Mike and Charlotte Kinney Best of Parker. Jason graduated from Allegheny-Clarion Valley High School in 1990. After high school, he enlisted in the Army and served with the 82nd Airborne and then joined the National Guard. Jason graduated from Clarion University with a teaching degree. He married Stacy Smathers on January 23, 2003, and she survives. Jason was a Fourth Grade Science Teacher at the Union Elementary School. He coached for numerous sports; including football, Junior High Basketball, YMCA Flag Football, T-Ball, and Softball. Jason was a member of the First United Methodist Church in New Bethlehem. He was also a lifetime member of the NRA. Jason was an avid Steelers fan. He enjoyed hunting, golfing, and most of all, spending time with his family. Jason was known as a big sweet teddy bear and loved by so many. He is survived by his parents; wife; a son: Gregory Nolf and his girlfriend, Bisha, of Pittsburgh; his very special daughter: Marley Best of New Bethlehem; two brothers: Gregory Best and Douglas Chambers, both of Ohio; a nephew; Dylan Best; a niece; Megan Best; and numerous aunts, uncles, and cousins. Jason is also survived by a special group of friends from high school; including his bestfriend: Shane Thompson. He was preceded in death by his sister: Laurie Chambers Rankin. The family will receive friends from 2 p.m. to 4 p.m. and 6 p.m. to 8 p.m. on Monday, December 30, 2019 at the Robert V. Burns Funeral Home in Clarion. Funeral services will be held at 11 a.m. on Tuesday, December 31, 2019 in the funeral home with Rev. Dan Myers, pastor of the West Freedom United Methodist Church. Interment will follow in the West Freedom Cemetery.

Jason W. Best, 47, of New Bethlehem, passed away Thursday evening, December 26, 2019 at the Clarion Hospital. He was born on April 17, 1972 in Brookville; son of Mike and Charlotte Kinney Best of Parker. Jason graduated from Allegheny-Clarion... View Obituary & Service Information

The family of Jason W. Best created this Life Tributes page to make it easy to share your memories.

Send flowers to the Best family.