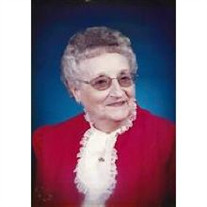 Jean L. Bish, 83, of Shippenville, died Friday, March 15, 2013, at the Golden Living Center in Shippenville. Born May 29, 1929 in Farmington Twp. Clarion; she was the daughter of James W. and Sidney L. Knapp Johnston. She was married on October 28, 1958 to James A. Bish, who preceded her in death on January 15, 1991. In earlier years, Jean worked at Knox Glass for five years.  She then worked as a nurses aid at Franklin Hospital, Clarion Hospital, and Clarview Nursing and Rehabilitation Center, where she retired in 1991 after 30 years. She was an active fireman in Shippenville/Elk Township Volunteer Fire Company for 25 years and was the former fire police captain, where she received many commendations throughout the years.  She was also a member of the Woman’s Auxiliary at the Clarion Moose Lodge 101.  Jean enjoyed crocheting and crafting. Surviving are a daughter, Ruth M. Boorech and her husband, Paul, of Shippenville; and a brother, Robert L. Johnston of Florida. She was preceded in death by her parents; husband; five sisters, Mrs. Orval (Grace) Andrews, Mrs. Delbert (Irene) Cook, Mrs. Roy (Pearl) Bickel, Mrs. Howard (Marie) Ehler, and Anna Johnston; and four brothers, Wayne Johnston, Wilbert Johnston, Mead Johnston, and Harold Johnston. Family will receive friends from 2 to 4 p.m. and 7 to 9 p.m. on Tuesday, March 19, 2013, at the Robert V. Burns Funeral Home, 638 Wood Street, Clarion. Funeral services will be held at 11 a.m. on Wednesday, March 20, 2013, in the funeral home with Rev. Betsy Copper, pastor of the Shippenville/Providence United Methodist Churches, officiating. Interment will be held in the Cedarview Memorial Park in Strattanville. Memorials and donations can be made to the Clarion Forest VNA Hospice, 271 Perkins Road, Clarion PA 16214.

Jean L. Bish, 83, of Shippenville, died Friday, March 15, 2013, at the Golden Living Center in Shippenville. Born May 29, 1929 in Farmington Twp. Clarion; she was the daughter of James W. and Sidney L. Knapp Johnston. She was married on October... View Obituary & Service Information

The family of Jean L. Bish created this Life Tributes page to make it easy to share your memories.