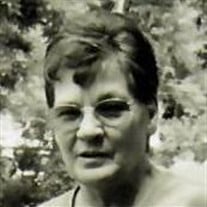 Jeanette J. Rex, 77, of Shippenville, passed away unexpectedly Friday, November 23, 2018 at her home peacefully of natural causes. She was born on February 11, 1941 in Oil City; daughter of the late Luther and Amanda Guth Irwin. Jeanette married Robert E. Rex, Sr. on September 14, 1957, and he preceded her in death. She was a member of the Immaculate Conception Catholic Church in Clarion. She worked at the Knox Glass Plant, Country Fair in Shippenville, and the Clarion Walmart. Jeanette was an outstanding seamstress. She loved to quilt and won many awards for her quilts. Jeanette enjoyed gifting many memory teddy bears to family and friends. She was always willing to help others with rides to doctor’s appointments, dog sitting, and many lessons on sewing and quilting. Jeanette is survived by her three sons, Robert E. Rex, Jr. of Knox, Tim E. Rex of Georgia, and Kelly J. Rex and his wife Peggy of Cranberry, and eight grandchildren, Cory Khale, Chelsea, Adam, Gabrielle, Sasha, and Kevin Rex, Jessica Carroll and her husband Ian, and Jamie Elder. She is also survived by her brother, William Irwin and his wife Barb of Colorado and a sister-in-law, Cheryl Irwin of Titusville. Jeanette was preceded in death by her parents, husband, a brother, Phillip Irwin, a sister, LaDonna Kutchravy, a step sister, Lola Drusko, and her companion, Ron Fulton. Jeanette’s family will receive friends from 2 p.m. to 4 p.m. and 6 p.m. to 8 p.m. on Tuesday, November 27, 2018 at the Robert V. Burns Funeral Home in Clarion. Funeral Services will be held at 11 a.m. on Wednesday, November 28, 2018 in the Funeral Home with Rev. Monty Sayers, pastor of the Immaculate Conception Catholic Church in Clarion. Interment will follow in the Cedarview Memorial Park in Strattanville. Memorials or donations can be made in Jeanette’s name to the Shippenville-Elk Volunteer Ambulance, P.O. Box 160 Main Street, Shippenville, PA 16254.

Jeanette J. Rex, 77, of Shippenville, passed away unexpectedly Friday, November 23, 2018 at her home peacefully of natural causes. She was born on February 11, 1941 in Oil City; daughter of the late Luther and Amanda Guth Irwin. Jeanette married... View Obituary & Service Information

The family of Jeanette J. Rex created this Life Tributes page to make it easy to share your memories.

Send flowers to the Rex family.