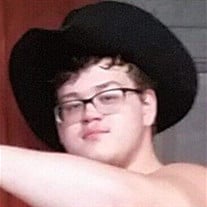 Jedediah R. “Jed” Brewer, 20, of Clarion passed away early Thursday morning, June 13, 2019 at the Clarion Healthcare and Rehab Center. He was born on November 17, 1998 in Pittsburgh; son of Steven and Millie Rossey Brewer of Clarion. Jed graduated from Clarion Area High School in 2017. He worked in plumbing and formerly worked at McDonalds and R.B.G. Bar & Grill, both of Clarion. He was inducted into the US Army National Guard on Friday, June 7, 2019. Jed was of the Protestant Faith. He enjoyed working on cars, shooting guns with his friends, driving his truck, and raising hell. Jed is survived by his parents; a sister: Heather Brewer of Warren; three brothers: Jacob Brewer and his wife Monique of Colorado, his twin brother: Ezekiel Brewer of Clarion, and Ollie Brewer of Clarion; two nieces: Ava and Riley; and two nephews: Ezra and Oscar. He is also survived by his paternal grandfather: Doc Brewer and his wife Dorothy of Brookville; his paternal grandmother: Pat Stanczyk and her husband Rich of Brookville; and his aunts, uncles, cousins, and many friends. Jed was preceded in death by his brother: Zachery Brewer and his maternal grandparents: Dick and Bernice Rossey. At Jed’s request, he would like everyone to dress casual for viewing and the funeral. The family will receive friends from 1 p.m. to 5 p.m. on Saturday, June 15, 2019 at the Robert V. Burns Funeral Home in Clarion. Funeral services will be held on Sunday, June 16, 2019 at 2 p.m. in the funeral home with Rev. Bob Thomas, pastor of the Kossuth Faith Church of the Nazarene. Interment will be held in the Asbury Cemetery of Strattanville. The family would like to make a special thank you to Alyson Murray and the Clarion Healthcare and Rehab Center for their care. In Lieu of flowers, the family would like donations be made to the funeral home.

Jedediah R. &#8220;Jed&#8221; Brewer, 20, of Clarion passed away early Thursday morning, June 13, 2019 at the Clarion Healthcare and Rehab Center. He was born on November 17, 1998 in Pittsburgh; son of Steven and Millie Rossey Brewer of Clarion. Jed... View Obituary & Service Information

The family of Jedediah R. Brewer created this Life Tributes page to make it easy to share your memories.

Send flowers to the Brewer family.