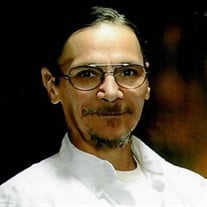 Jeffrey H. “Squirrell” Wolbert, 64, of Crown, gained his wings Wednesday evening, May 19, 2021 at UPMC Shadyside after putting up one hell of a fight against Cancer. He was born on December 9, 1956 in Clarion; son of the late Howard A. “Bowie” Wolbert and Gloria F. Wolbert Allio. Squirrell was a man of many trades. He was a lumber-handler, coalminer, and all around, a handyman. He was of the Catholic faith and attended the Scotch Hill United Methodist Church in Leeper and the St. Marys/St. Ann Roman Catholic Church in Crown. Squirrell also loved watching the daily mass on television. He enjoyed feeding the birds, walking his dog, Panda, playing pool, going to the driving range with his son, fishing, and watching Western movies. Squirrell always looked forward to his daily runs to Leeper for lottery tickets or hanging out with his friends at the Knotty Pines, having a cold beer. For those of you who knew Squirrell, knew how much of a jokester he was. He always had a joke ready for anyone. Squirrell is survived by his daughter, Sara Wolbert; his son, Jordan Wolbert; a grandson, Dillon; and his beloved friend and mother of his children, Judy Wolbert. He is also survived by his siblings, Duane Wolbert, Bonnie Wile, Sharon Best, Beverly Thompson, Jennifer Weaver, and Roger Wolbert; his “mothah”, Peg Leech; his special family friend, Tonya, who was always there to take care of him; and numerous nieces and nephews, including two special nephews, Ronnie and Dan, who he treated like his own. Squirrell was preceded in death by his parents; his step-dad, Robert “Bob” Allio; his companion, Deb Bauer; a brother, Ronald Wolbert; a sister, Melanie McLaughlin; and a nephew, Seth. The Robert V. Burns Funeral Home in Clarion is handling the arrangements. At Squirrell’s request, there will be no public visitation. A salute to Squirrell will take place at the Knotty Pines in Cook Forest on Friday, May 28, 2021 from 4 p.m. to 7 p.m. The family would like to make a special thanks to Dr. Kim, Dr. Moon, Dr. Clump, Alexis Warden, PA, and the staff at the UPMC Northwest Hillman Cancer Center in Pittsburgh for all of their care and support they gave Squirrell. In lieu of flowers, the family suggests donations be made to the funeral home to help with funeral expenses.

The family of Jeffrey H. Wolbert created this Life Tributes page to make it easy to share your memories.

Send flowers to the Wolbert family.