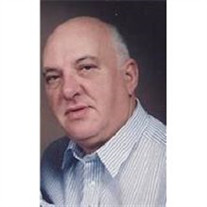 Jerry V. “Fudd” Clinger, 71, of Strattanville, passed away Tuesday, May 12, 2015 at his home. He was born on February 1, 1944 in Brookville; the son of Lenard and Ila Marie Solida Clinger Hopper and was raised by his grandparents, Ernest and Bessie Solida Jerry was married on October 30, 1971 to the former, Mary Lou DeMarco; who survives. He worked at Knox glass for 23 years and Domino’s Pizza in Clarion for 25 years. Jerry enjoyed hunting, outings with his grandchildren, watching sports, and also westerns on TV, especially John Wayne. He is survived by his wife, one daughter Sherry Clinger and her finance Steve Cummings, grandchildren, Scott Cummings and friend Ashley Dehner, and Sarah Cummings all of Strattanville, and one brother, Donald Clinger and Karen of Shippenville. Jerry is preceded in death by his parents, grandparents, and a number of aunts, uncles, and brother and sister-in-laws. Family will receive friends from 2 p.m. to 4 p.m. and 7 p.m. to 9 p.m. on Thursday, May 14, 2015 at the Robert V. Burns Funeral Home in Clarion. Funeral services will be held at 11 a.m. on Friday, May 15, 2015 in the funeral home with Pastor Lee Theiss of the Internal Life Tabernacle in Stattanville as presider.

The family of Jerry V. Clinger created this Life Tributes page to make it easy to share your memories.

Send flowers to the Clinger family.