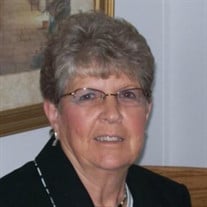 Joan “Hope” Cyphert Lander, 83, of Shippenville, passed away Monday morning, January 4, 2021 at the West Penn Hospital in Pittsburgh following a lengthy illness. She was born on May 17, 1937 in Huefner; only daughter of the late Edward Marion and Gwendolyn Pearl Sherman Cyphert. Joan attended Clarion Area High School. She met her husband, Russell Lander, when he returned from the military service. They were married on September 26, 1953 and had celebrated 63 years of marriage before he passed away in December of 2016. Joan worked while raising her six children. She worked for Rolo, ASR, Jamesway, Mr. Donut, and lastly, for O-I Glass Plant in Clarion, where she retired. Joan met and made many friends wherever she worked. Hope, as her family called her, and Russ enjoyed many winters in Florida after their retirement. She was a member of the Immaculate Conception Catholic Church in Clarion where she was also a part of the Ladies Guild. Joan was also a member of the Red Hatters Society. She enjoyed playing cards and spending time with her family and friends. Joan is survived by her six children, Cindy Black and her husband, Terry, of Shippenville, Donna Wilkinson and her husband, Jeff, of Gunnison, CO, Jodi Rhea and her husband, Doug, of Knox, Brenda Kapp and her husband, Phil, of Miola, Russ Lander and his wife, Julie, of Fern, and Diann “Chip” Kellerman-Straitiff and her husband, Rick, of Strattanville; nine grandchildren, Nathan Switzer and his wife, Cheri, Jason Switzer, Jeremy Switzer and his wife, Kristen, Troy Campbell and his wife, Mariah, Erik Campbell, Logan Chernicky, Ethan Kellerman, Adam Lander, and Rebecca Lander; twelve step grandchildren; five great-grandchildren; thirty-six step great-grandchildren; and a great-great grandchild. She is also survived by her five brothers, Donald Cyphert and his wife, Marie, John Cyphert and his wife, Betty, David Cyphert and his wife, Bonnie, Thomas Cyphert, and Ronald Cyphert and his wife, Georgean; two sisters-in-law, Shirley Cyphert and Carole Cyphert; and numerous nieces and nephews. Joan was preceded in death by her parents; husband; two sisters, Julie Klepfer Lander and LaRue Klepfer McLain; five brothers, Howard Klepfer, James Klepfer, Edward “Jack” Cyphert, Gary Cyphert, and Kenneth Cyphert; a half-brother, Harold Cyphert; five sisters-in-law; two brothers-in-law; and a son-in-law, Paul Kellerman. The Robert V. Burns Funeral Home in Clarion is handling the arrangements. There will be no public visitation. Mass of Christian Burial will be celebrated at 10 a.m. on Friday, January 8, 2021 at the Immaculate Conception Catholic Church with Rev. Monty Sayers presiding. Entombment will follow in the Immaculate Conception Catholic Mausoleum. In lieu of flowers, Donations or memorials can be made in Joan’s name to the Clarion Cancer Center, 150 Doctors Lane, Clarion, PA 16214 or Charitable Deeds & Services.

Joan &#8220;Hope&#8221; Cyphert Lander, 83, of Shippenville, passed away Monday morning, January 4, 2021 at the West Penn Hospital in Pittsburgh following a lengthy illness. She was born on May 17, 1937 in Huefner; only daughter of the late... View Obituary & Service Information

The family of Joan H. Lander created this Life Tributes page to make it easy to share your memories.

Send flowers to the Lander family.