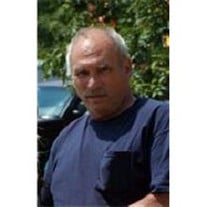 John D. Wilson, 62, of Sigel, died on Thursday, January 29, 2015, at the UPMC Presbyterian Hospital in Pittsburgh following an extended illness. Born on October 12, 1952 in Brookville; he was the son of John W. and Billois Delaney Wilson. John was married on May 18, 1974 to the former Mary Ann Mays, and she survives. He was a member of the St. Dominic Catholic Church in Sigel. In his early years, John worked as a drag line operator.  He then later founded John Wilson Trucking. He enjoyed farming and was a farmer most of his life.  He also enjoyed horseback riding, hunting, working, and spending time with his granddaughter, Emma. In addition to his wife, Mary Ann, he is survived by two children, Tim Wilson and his wife, Lori, of Bellefonte, and Jamie Wilson of Sigel; and a granddaughter, Emma Wilson of Sigel. Also surviving are three brothers, George Wilson and his wife, Shelly, of Brookville, Joe Wilson of Sigel, and Jimmy Wilson of Sigel; mother-in-law, Jane Mays of Brookville; a sister-in-law, Patty Mason of Clarington; and a brother-in-law, Jim Mays and his wife, Pat, of Marienville. He was preceded in death by his parents; father-in-law, Sam Mays; and two brothers-in-law, Bob Mays and Larry Mason. A celebration of his life will be held at from 11 a.m. to 3 p.m. on Saturday, February 7, 2015, at the Sigel Civic Center, 150 School House Road, Sigel.  Arrangements are under the direction of the Robert. V. Burns Funeral Home, 638 Wood Street, Clarion. Memorials and donations can be made to the Sigel Volunteer Fire Department, Rt. 949 South Highway, Sigel PA 15860.

John D. Wilson, 62, of Sigel, died on Thursday, January 29, 2015, at the UPMC Presbyterian Hospital in Pittsburgh following an extended illness. Born on October 12, 1952 in Brookville; he was the son of John W. and Billois Delaney Wilson. John... View Obituary & Service Information

The family of John D. Wilson created this Life Tributes page to make it easy to share your memories.

Send flowers to the Wilson family.