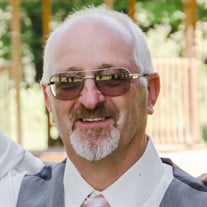 Jonathan Winfield Lewis, 60, of Clarion, a prominent area businessman, passed away unexpectedly of natural causes on Monday, June 1, 2020 at the age of 60. He was born on August 22, 1959 in Clarion; son of the late Emogene Brocious Lewis and Robert J. Lewis, who survives. He graduated from Clarion High School in 1977, where he lettered in Cross Country, Wrestling, and most importantly, Pole Vault in Track. From a young age, he always loved being outdoors, working on inventions, and building projects, which he later turned into a successful career, owning Jon Lewis Contracting and Leap of Faith Gymnastics, along with Laken Apartments in Clarion. He never stopped working, whether it was getting up early to tend to the animals on the farm, work in his gardens, doing construction with his very good friend, Roy Zeigler, his brothers, and the crew, or coaching gymnastics and pole vault in the evenings. After coaching in the evenings, he would study and create new drills to help his athletes succeed, earning them many medals and titles. The term “devoted father” doesn’t begin to describe the type of man Jon Lewis was. From walking the woods teaching Bailey about the types of trees, the value of hard work and coaching alongside her at the gym, to spending each day with his pride and joy, Laken- whether it was coaching her in gymnastics, track, and just being her overall best friend. In 2008 he constructed Leap of Faith Gymnastics, opening in 2009. From there, he personally coached his daughter, Laken, up through Level 10, even taking her to Olympic Coach Liang Chow’s in Iowa. He made numerous friends throughout his coaching career. He coached girls track through the 80s and picked it up again in 2016 to coach his daughter, Laken. Jon and Laken trained pole vaulting nearly every day and he was extremely proud of her accomplishments, including her state titles and records she set. Jon was looking forward to Laken’s freshmen year at Clarion University for Physical Therapy and to continue to help coach her in pole vault. Jon also enjoyed spending a couple days each week with Laken at the Pole Vault Club in Franklin. Jon was a devoted Christian who studied his bible daily. He wrote a note and kept it on his desk, “Take what life gives you, Make the most of it and enjoy it while it lasts.” He is survived by his devoted and loving wife: Patty; his daughters: Bailey Donaldson and her husband, Tyler, and Laken Noël Lewis; his seven brothers: Mark Lewis and his wife, Linda, Tim Lewis and his wife, Cheri, Robert “Steve” Lewis, Dan Lewis and his wife, Keri, Ben Lewis and his wife, Charity, Jason Lewis and his wife, Amanda, and Nate Lewis; and numerous nieces and nephews. Jon was preceded in death by his mother; two brothers: Phil and Adam; his paternal grandparents: Floyd and Dorothy Lewis; and his maternal grandparents: Clarence and Myrna Brocious. The family will receive friends from 3 p.m. to 7 p.m. on Friday, June 5, 2020 at the Robert V. Burns Funeral Home in Clarion. A Private Family Funeral will be held on Saturday, June 6, 2020 in the funeral home. Live streaming of the funeral will begin at 11 a.m. with Rev. Ron Swanson presiding. View the service via our facebook page at Burns Funeral Homes.

Jonathan Winfield Lewis, 60, of Clarion, a prominent area businessman, passed away unexpectedly of natural causes on Monday, June 1, 2020 at the age of 60. He was born on August 22, 1959 in Clarion; son of the late Emogene Brocious Lewis and... View Obituary & Service Information

The family of Jonathan W. Lewis created this Life Tributes page to make it easy to share your memories.