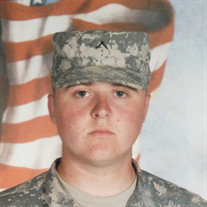 Our beloved Jordan River Booth, was called home to be with the lord on Wednesday, February 06, 2019 at the age of 29 after a long battle with addiction. For years we feared his addiction would claim his life and we are grateful that when he died, he was safe and with his family. He was born on July 29, 1989 in Oil City, he was the son of the late Robert E. Booth Jr. and Sharon L. Dunkle-Booth of Strattanville. Jordan was a 2008 graduate of Clarion Limestone High School and Clarion Vocational School with honors. He served in the United States Army Reserves for eight years in the 377th Engineer Company of Butler. Jordan received multiple awards, two of the highest awards that he was most proud of were hand delivered coins and were given by Generals. Jordan worked as a Heavy Equipment Engineer. He was a member of the Immaculate Conception Catholic Church of Clarion and also attended the New Rehobeth Greenville-Presbyterian Church of Clarion. Jordan enjoyed hunting, fishing, four-wheeling, riding his motorcycle, refurbishing tractors, and spending time with his family, especially his son, Grayson, who was the light of his life. He also loved being with his dog, Cami. Jordan was a gentle soul and he had a heart that was as big as it was broken. He put up a strong fight for 5 years, since the loss of his father. He is survived by his mother, Sharon, and her special friends, Margaret Brocious and Doug Travis, his son, Grayson Booth, his sister, Nicole Booth-Anderson and her husband Steven of Clarion; his maternal grandparents, Wayne and Marty Dunkle of Clarion; his paternal grandpa, Robert E. Booth Sr. and his wife JoAnne of Clarion; his paternal grandmother, Karen Sue Plyler of Clarion; two uncles, Richard Booth and his wife Tammy of Rimersburg and Eric James Simpson and his fiancé Tricia of Clarion; three aunts, Amy Jo Wobb and her husband Michael of Pittsburgh, Sheryl L. Kroh of Strattanville and Sharla Lea Dunkle-McCoy and her husband Shane of Brush Creek, TN; and numerous nieces, nephews, and cousins. Jordan is also survived by Christine Varner (wife) of New Bethlehem, her mother, Laura Campbell, also of New Bethlehem, her father, Tim Varner of Sligo, and her son, Alex Myers also of Sligo. Jordan was preceded in death by his father, an infant brother, his maternal grandmother, Mary M. Dunkle, his uncle, Daniel G. Booth, his step grandfather, Patrick “Bucky” Simpson, and his uncle, Jeremy D. Simpson. The family will receive friends from 1 p.m. to 8 p.m. on Friday, February 8, 2019 at the Robert V. Burns Funeral Home in Clarion. Funeral Services will be held at 11 a.m. on Saturday, February 9, 2019 in the Funeral Home with Pastor Guy Felmlee, pastor of the Center Hill Community Church. Interment will be held in the Cedarview Memorial Park in Strattanville. Donations can be made to the Funeral Home to help with Funeral expenses.

Our beloved Jordan River Booth, was called home to be with the lord on Wednesday, February 06, 2019 at the age of 29 after a long battle with addiction. For years we feared his addiction would claim his life and we are grateful that when he... View Obituary & Service Information

The family of Jordan R. Booth created this Life Tributes page to make it easy to share your memories.

Our beloved Jordan River Booth, was called home to be with the...

Send flowers to the Booth family.