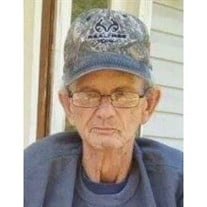 Joseph O. Fleming, 80, of Strattanville, formerly of Punxsutawney, passed away on Friday evening, March 31, 2017 in Strattanville at his daughter’s home where he has been staying. He was born on May 30, 1936 in Ebensburg; son of the late George James and Sarah Alverda Moore Fleming. Joseph was married on March 14, 1978 to Donna M. Bechel, and she preceded him in death on August 27, 2015. He was a Farmer and also drove School Bus. Joseph served in the Air Force. He was a member of the American Legion Post #582 of Rossiter. Joseph enjoyed watching Westerns, especially John Wayne, drinking coffee, reminiscing about the old days, summer, sitting on his porch, and mowing grass. He is survived by ten children, Candy Grove and her husband Roger of Strongstown, Joseph O. Fleming, Jr. of Clarion, Pamela Barr and her husband Chris of Dixonville, Edward Fleming and his wife Tina of Punxsutawney, Linda Swyers and her husband Don of Stattanville, Lisa Fleming of Stattanville, Eric Fleming, Sr. and his wife Keyra of Punxsutawney, Jason Fleming of Delancie, Dawn Fleming of Commodore, and Jesse Fleming, Sr. of Creekside. Joseph is also survived numerous grandchildren, great grandchildren, great great grandchildren, and a niece, Debra Hines of Johnstown. He was preceded in death by his parents, wife, a brother, George Fleming, a sister, Ellen Jane Fleming Loya, and three grandchildren, Matthew Mead Swyers, Heather Lynn Ray, and Teegan James Christian. Family will receive friends from 1 p.m. to 3 p.m. on Wednesday, April 5, 2017 at the Robert V. Burns Funeral Home in Clarion where Funeral Services will follow at 3 p.m. in the Funeral Home. Interment will be held in the Mount Calvary Cemetery in Limestone Twp.

Joseph O. Fleming, 80, of Strattanville, formerly of Punxsutawney, passed away on Friday evening, March 31, 2017 in Strattanville at his daughter&#8217;s home where he has been staying. He was born on May 30, 1936 in Ebensburg; son of the late... View Obituary & Service Information

The family of Joseph O. Fleming created this Life Tributes page to make it easy to share your memories.

Send flowers to the Fleming family.