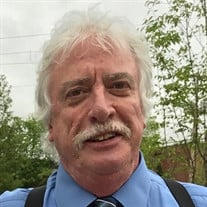 Joseph Preston Stahlman, 63, of Clarion, Pennsylvania died peacefully on Thursday, June 27, 2019 at UPMC Presbyterian Hospital in Pittsburgh, PA, surrounded by his family. Joseph was born on May 4, 1956 in Brookville, PA to John and Helen Stahlman. At 15 years old, he began working at his father’s business, Clarion Builders Supply, which has been owned by the Stahlman family since 1947. Following his brother Jack, Joseph took over the family business and proudly continued his dad’s legacy. He happily spent his life in Clarion County and recently celebrated the business’s 72nd anniversary. In the years before owning Clarion Builders Supply, he had various occupations, including carpenter, general builder, and draftsman. He spent time as a sound man for local bands after attending the Institute of Audio Research in New York City, often working large outdoor concerts. He was also a partner in C&J Sound Labs and Sound Cellar Studios with friend Chuck Glenn. They installed sound systems locally and supplied audio, video, lighting, and power for rock and roll venues and tour buses. Apart from his many accomplishments and work in the Clarion community, Joseph’s greatest joy was being a father to his daughter, Ashley. He was immeasurably proud of her. In February 2017, after seven years together, Joseph got engaged to Holly Ordiway, a constant source of light in his life. In his free time, he enjoyed ATV riding with Holly and his dog Lila. Lila was a true companion. No matter where he went she was by his side, often seen accompanying him around town. Joseph is survived by his daughter: Ashley Stahlman Leighlitner and her husband, Jacob; his fiancée: Holly Ordiway; his step-son: Crowe Thiem; his brother: Jack Stahlman and his partner, Marnie Prescott Walsh; his sisters: Jill Shirey and her husband, Michael and Jody Smith and her husband, Karl; his sister-in-law: Peggy Stahlman; his nieces and nephews: Joanna Kariofilis and her husband, John, Lindsey Shirey and her fiancé, Andrew Cygan, Jay Shirey and his wife, Kimberly Shadwick, Nicholas Shirey and his wife, Angela, Alexis Smith, April Smith, and Andrew Smith; and his four-legged best friend and partner-in-crime: Lila. He was preceded in death by his parents; his sister: Joyce Caruso; his nephew: Christopher Stahlman; his uncle: Tom (George) Stahlman and his wife, Julu. Family will receive friends from 4 p.m. to 8 p.m. on Tuesday, July 2, 2019 at the Robert V. Burns Funeral Home in Clarion. Additional viewing will be held from 10 a.m. to noon in the funeral home on Wednesday, July 3, 2019 with Mass of Christian Burial to follow at 1 p.m. at the Immaculate Conception Catholic Church in Clarion with Rev. Samuel Bungo, pastor of the Saint Nicholas Catholic Church in Crates. In lieu of flowers, memorial contributions may be made to the Tri-County Animal Rescue Center in Shippenville, PA in honor of his deep love for four-legged companions.

Joseph Preston Stahlman, 63, of Clarion, Pennsylvania died peacefully on Thursday, June 27, 2019 at UPMC Presbyterian Hospital in Pittsburgh, PA, surrounded by his family. Joseph was born on May 4, 1956 in Brookville, PA to John and Helen... View Obituary & Service Information

The family of Joseph P. Stahlman created this Life Tributes page to make it easy to share your memories.

Send flowers to the Stahlman family.