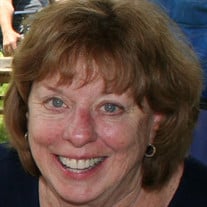 Following a brief illness, Judith Ann (Malone) Megnin passed away on Saturday, July 28th at UPMC Shadyside. She was surrounded by family and friends. Born in Jacksonville, Illinois on September 1, 1947, she was the daughter of John C. Malone and Virginia Crum. She was then raised in Wichita, Kansas. Judy attended nursing school at Saint Margaret and joined the U.S. Army Nurse Corps after graduation. While stationed at Walter Reed Army Medical Center, she met Robert Megnin, a patient and future husband. They were married on April 16, 1971. Later that year, they purchased what would lovingly become referred to as the “Yellowbrick Farm” in Crates. Judy was a beautiful soul. She was strong and vibrant and comforting and was unquestionably true North for her family. She enjoyed making pieces of stained glass, a skill she learned from her mother-in-law and that she, in turn, passed on to her family. Most evenings were spent sitting with her husband behind the house -glass of wine in hand- watching the birds until the fireflies began their nightly rising. Judy was an accomplished cook and an outstanding hostess; she made the farm a home for so many and celebrated so well. As a nurse she had the opportunity to share in the comfort and care of her community. Throughout her nursing career, Judy softly (but skillfully) mentored an unnumbered amount of students from acute care to the psychology ward. She impacted an untold amount of lives and will be truly missed. Judy is survived by her devoted husband, Bob, their son, Matthew (Holly) and their daughter, Katie (James). She is also survived by her grandchildren, Nathan and Jason, her sister Kay (Bill) McFarlane, sister-in-laws, Mary (Steve) Forgenie, Liz (Tom) Neil, Kathleen (Michael) Millay, and Cindy Sheehan. Also surviving are her nieces and nephews, Jennifer (Matt), Bill (Dolly), Steve (Carla), Christine, Emily (Dan), Catherine (Mike), Zachary (Kristy), Michael (Elisa), Eva (Jon), Daniel (Laura), Tom, and Joseph (Edla),17 great-nieces and nephews, two step nieces and their families, Judy’s father-in-law’s wife, Claire and family and many close friends who were dear to her. Visitation will be held on Thursday, August 2, 2018 at the Robert V. Burns Funeral Home in Clarion from 2-4pm and 6-8pm. Military Honors will be accorded by the American Legion Post #066 of Clarion on Friday, August 3, 2018 at 10am in the Funeral Home and Mass of Christian Burial will follow at 11am at St. Nicholas Church in Crates with Rev. Samuel Bungo, pastor presiding. Following the service, family and friends are invited to a luncheon at the St. Nicholas social hall to remember Judy and celebrate her life. The family suggests memorials be made to Family House, Shadyside.

Following a brief illness, Judith Ann (Malone) Megnin passed away on Saturday, July 28th at UPMC Shadyside. She was surrounded by family and friends. Born in Jacksonville, Illinois on September 1, 1947, she was the daughter of John C. Malone... View Obituary & Service Information

The family of Judith A. Megnin created this Life Tributes page to make it easy to share your memories.

Send flowers to the Megnin family.