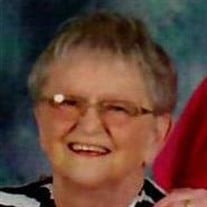 Judith Ann “Judy” Stitt, 77, of Clarion, passed away early Thursday morning, December 12, 2019 at the Clarion Healthcare and Rehab Center. She was born on January 14, 1942 in Warren, OH; daughter of the late Harold “Hud” and V. Opal Riley Walter. Judy retired from Sorce/Kraus after 25 years and also worked for Clarion Forest V.N.A Extended Care. She was a member of the First United Methodist Church in Clarion. Judy was the past President of the American Legion Post #66 Women’s Auxiliary in Clarion. She enjoyed reading, crafts, and spending time with her grandchildren. Judy is survived by her three daughters: Carla Taymans and her husband, Andrew, of Vermont, Valerie Stitt of Clarion, and Gretchen Hess of West Virginia; the father of her children: Carl Stitt of Rimersburg; three grandchildren: Katie Petto and her husband, David, of Massachusetts, Jackson Taymans of Vermont, and Abby Hess of West Virginia; her brother: Butch Walter and his wife, Pheroby, of Clarion; two nephews: Jim Walter of Cochranton and Jeff Walter of Clarion; and a niece: Diane Walter of Clarion. She was preceded in death by her parents and numerous cousins. The Robert V. Burns Funeral Home in Clarion is handling the arrangements. There will be no public visitation. A private memorial service will be held on Saturday, December 14, 2019 at the First United Methodist Church in Clarion with Rev. John Flower, pastor presiding. Interment will take place in the New Rehobeth-Greenville Presbyterian Cemetery. In lieu of flowers, Donations or memorials can be made in Judy’s name to the First United Methodist Church, 600 Wood Street, Clarion PA 16214.

The family of Judith A. Stitt created this Life Tributes page to make it easy to share your memories.

Send flowers to the Stitt family.