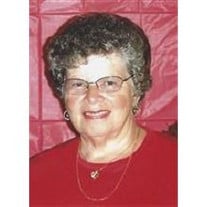 Judy Mae Schwab, 74, of Sligo, went to be with her Lord and Savior on Monday, October 19th, 2015.   Born in Curllsville, on June 5, 1941; she was the daughter of the late Ernest and Jessie Stewart Shook.   She was happily married for 53-years to the love of her life, J. Herman Schwab, who preceded her in death on January 25, 2013.    Judy worked various jobs throughout her lifetime: Grandview Nursing Home, the Hallmark Store in the Clarion Mall, Clarion Electric, and Country Springs Independent Living from where she retired. Yet Judy's life was filled with other duties where she fulfilled her spiritual gift of service to others like volunteering at the Clarion Hospital, fulfilling several positions at the churches she attended throughout her life, and her most recent position as a volunteer for the Clarion Forest VNA.   She was a member of the Liberty Street Church of God in Clarion and was also a 35-year member of the Clarion County Camping Club of Cooks Forest. Besides camping, Judy loved spending time with her friends playing cards, meeting with her "Royal Ruby" ladies, or just sitting around the kitchen table visiting. Judy's hobbies included gardening, canning, cooking, and baking.    Judy's greatest calling in life was to her family and friends. She is survived by two sons, Eric Schwab of Clarington and Chuck Schwab and wife Brenda of Sligo, two daughters, Beth Miller and husband Rob of Lititz and Lisa Horton and husband Jeremy of Sayre. She was a loving grandmother to her grandchildren, Stephanie Luke and husband Brock, Tyler and Kevin Schwab, Jonathan, Joshua, and Nathan Miller, Brianna Schwab, Brayden and Gabriel Horton and to her great-grandchildren Kellan and Porter Luke. Judy's mothering-ways extended out to her nieces, nephews, and beyond. She was happiest when surrounded by her loved-ones.    She was preceded in death by her parents, husband, two brothers, Karl and Jack Shook, and one sister, Kaye Pollock.   Family will receive friends on Thursday, October 22, 2015 at the Robert V. Burns Funeral Home in Clarion from 2-4 and 6-8pm and also from 10-11am on Friday, October 23, 2015 at the Liberty Street Church of God where funeral services will be held at 11am with her nephew, Rev. Mark Pollock as presider.    Interment will follow in the Sligo Cemetery.   The family requests donations to be made in Judy's name to the Clarion Forest VNA, 271 T-790, Clarion, PA 16214.

The family of Judy M. Schwab created this Life Tributes page to make it easy to share your memories.

Send flowers to the Schwab family.