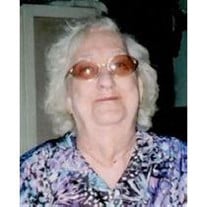 Julia A. Wilshire, 89, of South Jefferson Place, Clarion, died Thursday, December 2, 2010, at the Clarion Hospital. Born on October 26, 1921, in Flemington, WV, she was the daughter of Harry and Minerva Rentsh Waseman. Mrs. Wilshire was married in 1953 to Harold A. “Mike” Wilshire, who preceded her in death in February 2006. Before WWII, she was a telephone operator.  During WWII, she worked on a military aircraft in Ohio.  After coming to Clarion, she worked at Watson’s Dry Cleaners, ASR Medical Supply, and retired from Owens Illinois Glass Plant. Mrs. Wilshire attended of the Alpha Assembly of God Church in Clarion. She enjoyed playing cards and was a Bingo fanatic. Mrs. Wilshire is survived by four sons, Rick Wilshire of Nineveh; Roy Barlett and wife, Vicki, of Hopewell; Jim Wilshire and wife, Kathleen, of Limestone; and Terry Wilshire and wife, Joyce, of Lucinda; six grandchildren, numerous great grandchildren; and one sister, Rita Gween and husband, Ken, of Minerva, OH. In addition to her parents and husband, she was preceded in death by one son, Raymond Wilshire; five brothers, Harry Waseman, Bill Waseman, Jim Waseman, Jack Waseman, George Waseman; and one sister, Margret Blouse. Family will receive friends from 5 to 6 p.m. on Wednesday, December 8, 2010, at the Robert V. Burns Funeral Home in Clarion. Funeral services will be held at 6 p.m. on Wednesday, December 8, 2010, in the funeral home with Rev. Phillip Thomas officiating. Interment will be held in the Cedarview Memorial Park in Strattanville.

Julia A. Wilshire, 89, of South Jefferson Place, Clarion, died Thursday, December 2, 2010, at the Clarion Hospital. Born on October 26, 1921, in Flemington, WV, she was the daughter of Harry and Minerva Rentsh Waseman. Mrs. Wilshire was married... View Obituary & Service Information

The family of Julia E. Wilshire created this Life Tributes page to make it easy to share your memories.

Send flowers to the Wilshire family.