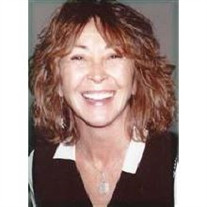 June Marie Hetrick, 68, of Clarion, passed away peacefully on Thursday, April 9, 2015, after a courageous battle with pancreatic cancer.    She was born on March 26, 1947 in Franklin, to Dr. Robert “Cudge” and Betty McElhattan.   She married Dr. Richard “Denny” Hetrick on December 20, 1969 and he survives.  June and Denny celebrated 45 beautiful years of marriage.   Also surviving are her daughters, Betsy Hetrick of Clarion and Amy Rouze of Richmond, VA.  June was a beloved daughter to Betty McElhattan, and adored sister to Kay Tansey, Sally Knipp (James), Sue Griffen (David), and Jane McElhattan.  June leaves behind many nieces, nephews, and grand nieces and nephews.   She was preceded in death by a son, Terry Jason “T.J.” Hetrick; her father, Dr. Robert “Cudge” McElhattan; paternal grandparents, Robert Alexander and Twila McElhattan; maternal grandparents, M.B. “Dutch”  and Florence “Flossie” Rhodes; two uncles, Gene Rhodes and Glennie Rhodes; father-in-law, Ray Hetrick; and mother-in-law, Ruth Hetrick.    June graduated from Franklin Area High School in 1965.  She obtained an Associate’s degree in Clerical Studies from Robert Morris University.  Shen then worked for two years at Franklin Steel.  June obtained a Bachelor’s degree from Indiana University of PA in 1969 with a degree in Elementary Education.  June taught third grade in Dexter, ME from 1970 to 1972.  She resumed employment at Clarion University of PA as the Office Manager for the faculty union, APSCUF from 1981 to 2007.   June was known for her genuine soul, an unrelenting and natural ability to project a positive, charismatic, and loving persona to all that had the pleasure of knowing her.  She will be remembered for her positive attitude, generosity, contagious laugh, and beautiful smile.  June always extended an open invitation to her home with enthusiasm and displayed a radiance of excitement and love at gatherings.  She befriended all that met her with her positive thoughts, perseverance through life’s obstacles, and lived by the motto “I am a fighter”.  June lived her life for her family and friends.  She was intensely dedicated and centered to her role as a grandmother to grandchildren, Luke and Talis.  June was inseparable with her sister, supporter, and best friend, Sally.  She leaves behind her loving companion, her dog, Katie.  June’s departure is extremely felt and sorrowed by all that knew her.  A life gone too soon and mourned deeply.   The family would like to extend extreme gratitude to Dr. Jamie Mullin, Penny Caulfield, R.N., and nursing staff from the Clarion Hospital Cancer Center for their excellent care and personal attention.  Sincere recognition to Sally Knipp, Sue Griffen, and Sandy Rhodes for their endless support and kind demeanors.  Extended appreciation to Rosanne McGuigan, Carol Sobolewski, and Carroll Girvan for the years of close friendships and memories.  Special recognition to Pat and Rosanne McGuigan, and Al Jacks for dedication to the family through this difficult time.  There will be no funeral services.  A memorial celebration for family and friends honoring June will be held at a later date. The family requests that contributions be made to the Clarion Hospital Cancer Center, 150 Doctors Lane Suite 1, Clarion PA 16214.   May the wings of the butterfly kiss the sun. And find your shoulder to light on.  See you over the rainbow. Your loving family, Denny, Betsy, Talis, Amy, and Luke

The family of June M. Hetrick created this Life Tributes page to make it easy to share your memories.

June Marie Hetrick, 68, of Clarion, passed away peacefully on...

Send flowers to the Hetrick family.