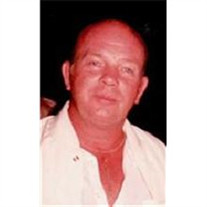 Karl L. “Mud” Stewart, 67, of Curll Road, Sligo, died Wednesday morning, March 24, 2010, at the St. Vincent Hospital in Erie. Born October 3, 1941, in Strattanville, he was the son of Mason C. and Ruth G. Lee Lawrence. He was married on March 8, 1968 to the former M. Suzanne Master, who survives. Mr. Stewart was a heavy equipment operator for the C & K Coal Company for over 20 years. He was a member of the VFW, Moose, and Eagles, all of Clarion, and the Rimersburg Hose Company. In addition to his wife, he is survived by three children, Karl Dean Stewart and wife, Thelma, of Rimersburg; Larry Scott Stewart and wife, Diana, of D.C.; and Tracy L. Stitt of Strattanville; and six grandchildren, Ashley Stewart and Cody Stewart of Rimersburg; Tyler Stitt and Josie Stitt of Strattanville; and Chandler and Britney Stewart of D.C. Also surviving is mother-in-law, Pauline Master of Clarion; two brothers, Sonny Lawrence of Curllsville; and Tom Lawrence and wife, Patsy, of Clarion; three sisters, Janet Knight and husband, Dwight, of Shippenville; Carolyn Grinnell and husband, Ed, of Mansfield; and Doris Bish and husband, Larry, of Clarion; sister-in-law, Bobbie Lawrence of Curllsville; and a number of nieces and nephews. He was preceded in death by his parents; his adopted parents, Harold and Garnet Stewart; brother, Ronald Lawrence; father-in-law, Pete Master; and nephew, Ted Lawrence. Family will receive friends from 2 to 4 p.m. and 6 to 8 p.m. on Friday, March 26, 2010, at the Robert V. Burns Funeral Home in Clarion. Funeral services will be private.

The family of Karl L. Stewart created this Life Tributes page to make it easy to share your memories.