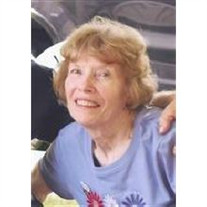 Kathleen Phyllis Burns Craig, 77, of 39 Chestnut Ridge Drive, Clarion, went to be with her Savior on Wednesday evening, September 12, 2012, at the UPMC Presbyterian Hospital in Pittsburgh. Born December 18, 1934 in Sligo; Kathleen was the daughter of the late Clair Riley Burns and Gladys Ruth Somerville Burns. She was a 1952 graduate of Sligo High School, where she was an active participant in the chorus and band. On August 28, 1953, she married her high school sweetheart, Donald “Chirp” Craig of Callensburg, and he survives.  They recently celebrated their 59th anniversary. Kathleen was employed by Owens Illinois Glass Factory for 9 years, before settling down to start her family.  At that time, she started her career at Paul’s Market, in Sligo, where she was head of the meat department and managed the finances and store inventory.  Kathleen retired in 1994, with 26 years of service. She was a devoted Christian woman who loved the Lord.  Kathleen was a long time member of the Sligo Methodist Church, before attending Zion Baptist Church in Reidsburg, and most recently, New Hope Church in Strattanville.  Her involvement included Women’s Prayer Group, The Sligo Ladies Auxiliary, The United Methodist Women’s Group, and Church Choirs & Ladies Trio’s.  She was an active participant in missionary work through the years, where she travelled to New York City, Pittsburgh, and southern Kentucky to minister to the less fortunate.  Her favorite scripture was in Psalms 119. Kathleen was a member of the Sligo Order of the Eastern Star and the Clarion County YMCA.  She made it her life long effort to generously contribute to numerous charities and foundations for the good of other people. Kathleen and Chirp enjoyed travelling extensively throughout their marriage.  In recent years, they would often take “car-rides” together, usually ending up at an ice-cream shop.  She loved to cook and bake, and always had a casserole or pie in the oven.  Some of her other hobbies included playing cards and board games, gospel music, attending local sporting events, and following the Steelers, Pirates, and Penn State athletics. Above all else, Kathleen’s crowning achievement was her lifelong dedication to her family.  She is survived by her loving and devoted husband, Chirp.  Also surviving are two children, Tina Craig Siegel of Newport Beach, CA, and Jeffrey Craig of Clarion; three grandchildren, Nikki Siegel Silverman, Christopher Murphy, and Andrew Craig; and one great-grandchild, Ava Rosalyn Silverman.  In addition, she is survived by her sisters, Priscilla Moore and Gladys Shoup; and many cousins, nieces, and nephews.  Kathleen was preceded in death by her parents and brother, Richard Burns. She was a dear friend to many and will be missed, but forever remembered by all. Family will receive friends from 1 to 3 p.m. and 6 to 8 p.m. on Sunday, September 16, 2012, at the Robert V. Burns Funeral Home, 638 Wood Street, Clarion, and from 10 to 11 a.m. on Monday, September 17, 2012, at the United Methodist Church in Sligo. Funeral services will be held at 11 a.m. on Monday, September 17, 2012, in the United Methodist Church in Sligo with Pastor Colin Koch, pastor of the New Hope Church in Strattanville, officiating, assisted by, Pastor Craig Peterson, pastor of the United Methodist Church in Sligo. Interment will be held in the Sligo Cemetery. Memorials and donations can be made to National Breast Cancer Foundation, Inc., 2600 Network Blvd., Suite 300, Frisco, Texas 75034.

Kathleen Phyllis Burns Craig, 77, of 39 Chestnut Ridge Drive, Clarion, went to be with her Savior on Wednesday evening, September 12, 2012, at the UPMC Presbyterian Hospital in Pittsburgh. Born December 18, 1934 in Sligo; Kathleen was the daughter... View Obituary & Service Information

The family of Kathleen P. Craig created this Life Tributes page to make it easy to share your memories.

Send flowers to the Craig family.