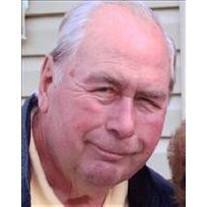 Keith McFadden, 81, of Washington Street, Strattanville, died Monday, Dec. 8, 2008, in Mercy Hospital, Pittsburgh. Born Oct. 17, 1927, in Mahaffey, Pa., he was the son of Aden and Anna Tooke McFadden. He graduted from the Mahaffey High School and DuBois Business College in the early 1960s. He was married July 22, 1948, to the former Glenna R. Ross and she survives. A veteran of World War II, he served with the U.S. Navy aboard the destroyer USS Gainard. He was a member of the American Legion Post in Strattanville. He was of the Protestant faith. Mr. McFadden became a certified public accountant on July 26, 1963. Among his many accomplishments, Mr. McFadden was a partner with his son in the accounting firm of McFadden and Company for many years. He was a past president of the Northwest Chapter of Certified Public Accountants. He was a long-time member and past chief of the Strattanville Volunteer Fire Company and previously served on the Strattanville Borough Council. Mr. McFadden was a long-time member of the Pine Crest Country Club where he was an avid golfer. He was a member of the Ecceles-Lesher Foundation board of directors and the First Seneca Bank advisory board. Surviving in addition to his wife are five children, Michael K. McFadden of Strattanville, Joyce A. Scalercio and her husband Anthony of Sewickly, Susan M. Schmader and her husband Richard of Strattanville, Jeffrey L. McFadden and his fiance Shelly K. Hetrick of Strattanville and Becky J. Berrier and her husband Matthew of Carlisle. Also surviving are 13 grandchildren and five great-grandchildren; a sister, Betty Betta of Weedville; a brother, Ward McFadden and his wife Margaret of Brockway; and numerous nieces and nephews. Preceding him in death were his parents, a brother DeLee McFadden and an infant daughter. Friends may call from 2 to 4 and 7 to 9 p.m. Thursday at the Robert V. Burns Funeral Home in Clarion. Funeral services will be conducted at 11 a.m. Friday in the funeral home with the Rev. Harold O. Jacobson, pastor of the Grace Lutheran Church in Clarion, officiating. Interment will be in Watts Cemetery, Clearfield County. Donations may be made to Strattanville Volunteer Fire Company.

The family of Keith McFadden created this Life Tributes page to make it easy to share your memories.

Send flowers to the McFadden family.