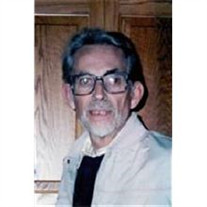 Kenneth F. Emerick of 413 Ridgewood Road, Shippenville, died Thursday, November 24, 2011, at his home. Born July 19, 1925, in Brookville; he was the son of Fred M. and Minnie Smith Emerick. Mr. Emerick was a graduate of Brookville High School and DuBois Business College prior to his employment as personnel manager at Brookville Glove Company. He graduated from Clarion State College with majors in library science and the social sciences.  He earned a Master of Library Science degree from Rutgers University in 1960. He was married in July 1982, in Morgantown, WV, to the former Mary Maxwell Kennedy, and she survives. Ken retired from Clarion University as assistant/librarian after 27 years service.  He came to the University after serving as director of the public library in Wedsworth,OH. Previously he had served in various capacities in public libraries in East Liverpool, Mansfield and Massillon, OH.  He had also served as a high school librarian in Bayville, NJ and as reference librarian at Denison University in Granville, OH. Mr. Emerick wrote for the Encyclopedia Americana in 1963.  In the mid-1960’s he authored a weekly column largely devoted to public affairs for the Clarion News entitled “From Over Here” under the pseudonym of Ross Emerson. After extensive research in the United States and Canada during a University sabbatical he wrote War Resisters Canada; the World of the American Military Political Refugees which was published in 1972. He has held long time memberships in the American Civil Liberties Union, the War Resisters League, the Central Committee for Conscientious Objection and the Venango County Human Society. In addition to his wife, Mary, he is survived by his son Schuyler of Clermont, FL and step-daughters, LaVerne Hamilton of Canton, OH and Karen Gowins of Gnadenhutten, OH. Also surviving are sisters, Shirley Shrefler and her husband, David, of Brunswick, OH; Joycelyn Silvis and her husband, Neil, of Brookville; and Nancy Monnoyer and her husband, Perry, of Cheraw, SC. He was preceded in death by his parents, four brothers, Robert, Jack, Roger, and William, and a sister, Barbara McGaughey. Private burial services were held at the Clarion Cemetery. A remembrance and memorial service will be held at 11 a.m. on Friday, December 2, 2011, at the Robert V. Burns Funeral Home. Memorial contributions can be made to any humane society or to your public library.

The family of Kenneth F. Emerick created this Life Tributes page to make it easy to share your memories.

Send flowers to the Emerick family.