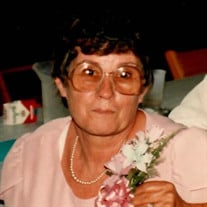 L. Jean Griebel, 91, formerly of Miola, passed away earlier Saturday morning, August 28, 2021 at the McKinley Heath Center in Brookville after residing there for 13 years. She was born on January 15, 1930 in New Kensington; daughter of the late William Paul and Verna Marie Moore Reed. Jean was a 1947 graduate of Clarion Area High School. On May 15, 1948, she married Regis “Dick” Griebel in Lucinda. He preceded her in death on May 20, 2009. Jean worked as a Nurse’s Aide at the Clarion Hospital and later used those skills to care for many of her neighbors and friends in Miola. She enjoyed reading and cooking and was known for her delicious potato salad and cinnamon rolls. You could always count on a huge meal being cooked for the holidays. While living at McKinley, Jean enjoyed playing bingo and delighted in winning the jackpot. She is survived by her children, Carole Cyphert, Michael (Katha) Griebel, John Griebel, Susan (Luke) Daley, and Lisa (George) Roberts; five grandchildren, Stephanie Geesey, Bradley Cyphert, Jaime Slack, Erica Palencia, and Tabitha Daley; six great grandchildren, four great-great grandchildren; and two step great granddaughters. Jean is also survived by her two sisters, Ruth Booth and Maxine Griebel; a brother, Regis Reed; and numerous nieces and nephews. In addition to her parents and husband, Jean was preceded in death by her sister, Joyce Buck; her brother, William Reed; an infant sister; and a son-in-law, Kenneth Cyphert. Visitation will be held from noon to 2 p.m. on Saturday, September 18, 2021 at the Robert V. Burns Funeral Home with a Memorial Service to follow in the funeral home at 2 p.m. with Pastor Ray Baker, Chaplin at Laurelbrooke Landing. Interment will take place in the Saint Joseph Catholic Cemetery in Lucinda. In lieu of flowers, Donations can be made in Jean’s name to the Activities Department at the McKinley Heath Center, 133 Laurelbrooke Drive, Brookville, PA 15825.

L. Jean Griebel, 91, formerly of Miola, passed away earlier Saturday morning, August 28, 2021 at the McKinley Heath Center in Brookville after residing there for 13 years. She was born on January 15, 1930 in New Kensington; daughter of the late... View Obituary & Service Information

The family of L. Jean Griebel created this Life Tributes page to make it easy to share your memories.

Send flowers to the Griebel family.