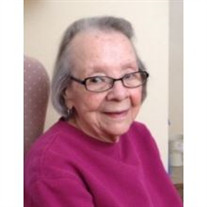 Lauretta Faye Hartle, 90, former longtime resident of Clarion, passed away on Friday, September 16, 2016 at St. Paul’s in Greenville, PA. Lauretta was born November 28, 1925 in New Kensington, PA. She was the only child of Howard and Faye Steele Clawson. She graduated in May, 1943, from New Kensington High School and continued her education in the Cadet Nursing Program at Mercy Hospital in Pittsburgh from June 1943 until December 1944. Lauretta was married to Francis “Jerome” Hartle on June 20, 1945, at St. Michael’s Catholic Church in Fryburg by Monsignor Theobold. Jerome preceded her in death on January 28, 2010 after 64 years of marriage. Her family was her most prized possession and she was a mother and homemaker first. Sunday dinners and holidays were important family events and she was an excellent cook. After raising her family, Lauretta worked for 22 years at Sorce Incorporated and, upon retiring from Sorce, she volunteered at the Clarion Hospital. Lauretta is survived by four sons and their families; Stephen Greer and wife Jean of Sarasota, FL; Michael Jerome of Daufuskie Island, SC; Patrick Shawn and wife Judy of Hudson, OH; and Matthew Scott and wife Carolyn of Transfer, PA. She is also survived by six grandchildren; Tessa Elizabeth, Haley Anne and husband Niall, Shawn Michael and wife Erica, Christopher Patrick, Jessica Marie and Matthew James. In addition to Jerome, she was preceded in death by her parents and twin sons lost at birth. Lauretta was the last member of that generation of the Hartle family and spouses. At her wishes, there will be no visitation or service. The family will have a private service at a later date. The Robert V. Burns Funeral Home in Clarion is handling the arrangements. Donations can be made in her name to the Immaculate Conception School in Clarion, the Clarion Free Library, or to the Clarion PAWS Animal Rescue.

Lauretta Faye Hartle, 90, former longtime resident of Clarion, passed away on Friday, September 16, 2016 at St. Paul&#8217;s in Greenville, PA. Lauretta was born November 28, 1925 in New Kensington, PA. She was the only child of Howard and... View Obituary & Service Information

The family of Lauretta F. Hartle created this Life Tributes page to make it easy to share your memories.