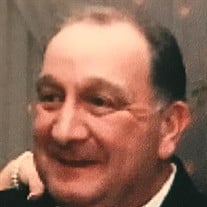 Laverne J. Lewis, 68, of Shippenville passed away on Wednesday, October 11, 2017 unexpectedly at his home of natural causes. He was born on February 9, 1949 in Pittsburgh. The son of the late Edward J. and Dorothy Zacherl Lewis. Laverne was raised between East Brady and Zacherl’s Farm, Shippenville. His family’s farm which was established in the 1850’s. He was honorably discharged from the U.S. Army in 1968. Laverne married Karen Hepfl on October 13, 1973. Friday they would have joyously celebrated their 44th Anniversary. Laverne spent his early years working within the construction industry. He was later asked to become a partner in Zacherl’s Farm and spent the remaining years happily farming the land of his ancestors. He was a member of the Immaculate Conception Catholic Church in Clarion and a member of the Pennsylvania Farm Bureau. Laverne loved spending time with his family; especially his grandchildren. He also delighted in his morning coffee with the Country Fair crew. He is survived by his wife and children: Mathew J. Lewis, Aaron P. Lewis and wife Sunshine of Shippenville, Lance A. Lewis and wife Debra of Panama City, FL and Craig D. Lewis and wife Catherine of Shippenville. Five grandchildren: Marlon, Mason, Maggie, George and Ben Lewis. Laverne is also survived by his siblings: Mary Seaman (Arthur), Mark Lewis, Julie Stoughton (Dale), Sue Bonacum, Edward Lewis and Jean Lewis. Brother and sister in laws: Joseph Reed, Mark Reed, Julie Campbell, Lisa Reed, Patricia Schmader and Patrick Reed. Mother-in-law, Rita Reed and special Uncle, David Zacherl, other aunts and numerous nieces and nephews. He is preceded in death by his parents and father in law, Joseph Reed. The family will receive friends on Sunday, October 15, 2017 from 1:00 p.m. to 3:00 p.m. and 5:00 p.m. to 8:00 p.m. at the Robert V. Burns Funeral Home in Clarion. Mass of Christian Burial will be celebrated Monday, October 16, 2017 at 11:00 a.m. in the Immaculate Conception Catholic Church in Clarion with the Rev. Monty Sayers pastor presiding. In lieu of flowers the family request memorials or donations can be made to a charity of your choice.

Laverne J. Lewis, 68, of Shippenville passed away on Wednesday, October 11, 2017 unexpectedly at his home of natural causes. He was born on February 9, 1949 in Pittsburgh. The son of the late Edward J. and Dorothy Zacherl Lewis. Laverne was... View Obituary & Service Information

The family of Laverne J. Lewis created this Life Tributes page to make it easy to share your memories.

Laverne J. Lewis, 68, of Shippenville passed away on Wednesday,...

Send flowers to the Lewis family.