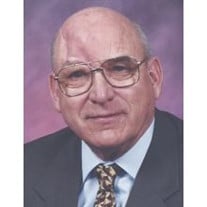 Mr. Leland L. “Lee” Rupert, 84, of Clarion, passed away on April 28, 2017, as a resident of the McKinley Health Center in Brookville. Born March 3, 1933 in New Kensington, Leland was the son of the late Thomas Owen and Hazel Fishel Rupert. He married Judith Dunn on December 15, 1956 and she preceded him in death on July 19, 2014. Lee attended Penn State University and was drafted into the United States Army during the Korean War conflict. Upon returning to the United States, he worked in the family business, R and H Trucking as a mechanic. He was a graduate of the Pennsylvania State Police Academy and employed by the Clarion Borough Police as a police officer. Lee was certified as a firearm’s instructor among one of his many law enforcement achievements. During his tenure he attained the rank of Lieutenant. He loved helping the Clarion community as a policeman. He retired in 1992 after 30 years of service. Lee was a member of the First United Methodist Church of Clarion. He was an avid hunter and loved to fish. He is survived by five children and their spouses, Leland E. Rupert and his wife Jean of Clarion, Jon D. Rupert and his wife Kelley of Saxonburg, Bonnie R. Tompkins and her husband Terry of Kennesaw, GA, Patty Abel and her husband David of Acworth, GA, and Judy Wolbert and her husband Paul of Marble, ten grandchildren, Lindsay Jankowski and her husband Joe, Mark Rupert, Jacob Rupert, Lauren Tompkins, Nancy Tompkins, Matthew Tompkins, Nicole Abel, Christopher Abel, Alex Wolbert, and Kirk Wolbert, two great-grandchildren, Haley Jankowski and Harper Jankowski, a brother, David Rupert of Denver, CO, and many nieces and nephews. In addition to his parents and wife, Leland was preceded in death by his brother Eugene Rupert, a sister Virginia Coleman, and a grandson Daniel Tompkins. Family and friends will be received from 2-4 pm and 6-8 pm on Tuesday, May 2, 2017 at the Robert V. Burns Funeral Home, 638 Wood Street, Clarion, PA. Additional viewing will be held from 10 a.m. to 10:30 a.m. on Wednesday, May 3, 2017 at the First United Methodist Church in Clarion. Military Honors will be accorded by the American Legion Post #066 Honor Guard at 10:30 a.m. in the Church with Funeral Services to follow with the Rev. Kevin Haley, pastor, and Pastor Randy Evans, Clarion Forest VNA Chaplin. Interment will be at Clarion Cemetery. The family has requested all memorials be sent to the Clarion Forest VNA and Hospice, 271 Perkins Road, Clarion, PA 16214.

The family of Leland L. Rupert created this Life Tributes page to make it easy to share your memories.

Send flowers to the Rupert family.