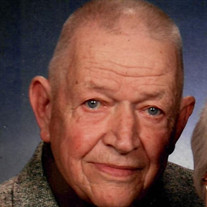 Leo J. Curran, 90, of Knox, passed away on Friday, December 28, 2018 at his home. He was born on December 2, 1928 in East Brady; son of the late Joseph M. and Mary “Minnie” Brody Curran. Leo was a graduate of East Brady High School. Leo married Kathryn H. Yurkovic on February 16, 1953, and she survives. He retired in 1993 from the Owen’s Illinois Glass Plant Maintenance department after thirty-six years. Leo was a Veteran of the United States Army 424th Battalion Field Artillery during the Korean Conflict. Before he entered into the Army, Leo worked for the Western Allegheny Railroad. He was a member of the Immaculate Conception Catholic Church in Clarion. Leo was also a member of the Knights of Columbus and Knights of Saint George. He was an avid hunter, enjoyed John Deer tractors, trains, and farming. He is survived by his loving wife, four children, James L. Curran and his wife Debbie, Paul R. Curran and his wife Cindy, Larry J. Curran and his wife Barb all of Knox, and Mary A. Curran and her husband Robert D. McCargar of Newark, Delaware, six grandchildren, and five great grandchildren. Leo was preceded in death by his parents, two sons, Thomas J. Curran and William G. Curran, two brothers, John Curran and Carl Curran, and his sister, Marie Hegginbotham. Leo’s family will receive friends from noon until 1 p.m. on Wednesday, January 2, 2019 at the Immaculate Conception Catholic Church in Clarion, where Mass of Christian Burial will follow at 1 p.m. in the Church with Rev. Monty Sayers, pastor presiding. Interment will follow in the Immaculate Conception Catholic Cemetery. Leo did his duty to God, family, and Country.

The family of Leo J. Curran created this Life Tributes page to make it easy to share your memories.

Send flowers to the Curran family.