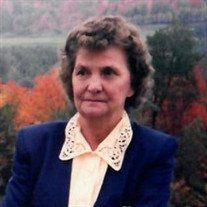 Leona R. Beers, 92, of Stattanville, passed away on Thursday, August 22, 2019 at the Clarview Nursing Center. She was born on July 29, 1927 in South Bethlehem, Armstrong County; daughter of the late John Edward and Margret E. Pence Goheen. Leona married Henry A. Beers on June 30, 1945, whom preceded her in death on May 15, 2019. She was a loving and caring homemaker. Leona was a member of the Strattanville United Methodist Church. She was also a member of the Gideons. Leona enjoyed reading, traveling, spending time with her family, and going to church. She loved flowers and completing puzzles. Leona is survived by her seven children: Linda Wilson and her husband Jim of Tennessee, Joyce Kahle and her husband Bob of Sigel, Stanley Beers and his wife Debra of Strattanville, David Beers and his wife Tracey of Corsica, Vicki Cooper and her husband Roger, Terry Beers and his wife Kayla and Gary Beers, all of Strattanville; nineteen grandchildren; twenty-four great grandchildren; and one great-great granddaughter. She is also survived by her siblings: Paul Goheen of Strattanville, Donna Beary of Fryburg, Caroline Amsler of Shippensburg, and William Goheen of Seneca. Leona was preceded in death by her parents; loving husband; two granddaughters: Emily and Crystal; a son-in-law: Bob Walker; her siblings: Helen Bauer, Keith Goheen, and Edward Goheen; and an infant sister. The family will receive friends from 1 p.m. to 4 p.m. on Sunday, August 25, 2019 at the Robert V. Burns Funeral Home in Clarion. Additional viewing will be held from 10 a.m. to 11 a.m. on Monday, August 26, 2019 at the Strattanville United Methodist Church, where funeral services will follow at 11 a.m. with Rev. Jeff Foor, pastor presiding. Interment will follow in the Strattanville Cemetery. In Lieu of flowers, Donations or memorials can be made in Leona’s name to the Strattanville United Methodist Church, 401 Washington Street, Strattanville, PA 16258 or to the Gideons International, P.O. Box 140800, Nashville, TN 37214.

The family of Leona R. Beers created this Life Tributes page to make it easy to share your memories.

Leona R. Beers, 92, of Stattanville, passed away on Thursday,...

Send flowers to the Beers family.