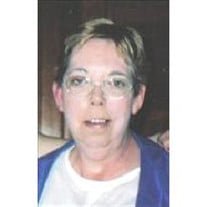 Linda Ann Gleghorn, 58, of Shippenville, died unexpectantly at her residence on Thursday May 14, 2009.   Born July 16, 1950, in Wilkinsburg, she was the daughter of the late James R. Beaver and Helen Beaver Yawczak of Ligonier.   Mrs. Gleghorn was married on June of 1979 to John W. “Chicken” Gleghorn, who preceded her in death on July 27, 2007.   She is retired and worked in management.   Mrs. Gleghorn is of the Lutheran faith.   She enjoyed gardening, baking, and her cats.   In addition to her mother is survived by brothers, James T. Beaver and wife, Karen, of Shippenville; Blain R. Beaver and wife, Nova, of LaRue, OH; Jacob L. Beaver and wife, Marleen, of Mt. Pleasant; and sister, Sherrie F. Dransart and husband, John, of Jeannette.   Also surviving are special nieces and nephews, Jason Dransart, Nicholas Dransart, Paul Beaver, Linda Dean Beaver, Nicole Beaver, James R. Beaver, Brandon Beaver, Thomas Beaver, Holly Henry, Warren Henry, and Hugh “Hoop” Henry; and step-nephews, Robert Almendinger, David Almendinger, and Randy Almendinger. She is also survived by great nieces and nephews.    She was preceded in death by her father and husband.   A memorial service will be held at 11 a.m. on Saturday, May 30, 2009, at the Robert V. Burns Funeral Home in Clarion with Rev. Harold O. Jacobson, pastor of the Grace Lutheran Church in Clarion, officiating.

The family of Linda Ann Gleghorn created this Life Tributes page to make it easy to share your memories.

Send flowers to the Gleghorn family.