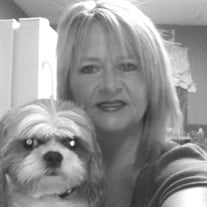 Lisa D. Elliott, 49, of Rimersburg, passed away on Friday, August 21, 2020 at the West Penn Hospital in Pittsburgh following a courageous battle with Cancer. She was born on September 11, 1970 in Clarion; daughter of Dennis E. Elliott, Sr. and Catherine L. Crissman Elliott of Putneyville. Lisa graduated from Redbank Valley High School in 1989. She owned and operated Helping Hands Daycare in Sligo for 24 years and also ran Elliott’s County Store in Sligo for a number of years. Lisa attended the Sligo Church of the Nazarene. She loved being a mom and mimi and thought the world of her family. Lisa also loved her dog, Razzy, who passed away earlier this year. She was the type of person who always looked at the positives in everything and would do anything for anyone. Lisa is survived by her parents: Dennis and Catherine; her fiancé: Garry L. Myers, Jr. of Rimersburg; her five children: Kurtis Shirey and his wife, Fontaine, of Sligo, Andrew J. Shirey and his girlfriend, Jessica Brink, of East Brady, Abigail L. Bauldoff and her husband, Brandon, of Chicora, and Logan W. Terwint, and Elizabeth G. Myers, both of Rimersburg; and five grandchildren: Connor Shirey, Kyle Shirey, Finn Shirey, Elliott Bauldoff, and Corbin Shirey. She is also survived by her two brothers: Buck Elliott, Jr. and his wife, Missy, of New Bethlehem and Brian Elliott and his wife, Cindy, of Putneyville; her nieces and nephews: Crystal Bish and her husband, Colby, of Mayport, Brandon Elliott and his wife, Tara, of Hawthorn, Zach Elliott of Oil City, Dylan Sheakley and his wife, Nikki, of Brookville, Bobby Boyer of Cherry Tree, and Cole Boyer of Strattanville; a sister-in-law: Jodi Reed and her husband, Mark, of Clarion; and her best friend: Janie Bowser of Rimersburg. Lisa was preceded in death by her paternal grandparents: John and Geraldine Elliott; and paternal step grandmother: Martha Elliott; her maternal grandparents: Herman and Clodie Crissman; and her father-in-law: Garry Myers, Sr. The family will receive friends from 2 p.m. to 4 p.m. and 6 p.m. to 8 p.m. on Tuesday, August 25, 2020 at the Burns Funeral Home & Crematorium, Inc. in Rimersburg. Due to Governor Tom Wolf’s mandate, we are only permitted to have 25 people in the building at a time. Please limit your stay inside during visitation so we can accommodate all who want to pay their respects. A private funeral will be held on Wednesday in the funeral home with Rev. Gene Hill, pastor of the Sligo Church of the Nazarene. Interment will follow in the Rimersburg Cemetery. In lieu of flowers, Memorials or donations can be made in Lisa’s name to the West Penn Hospital, 4800 Friendship Ave, Pittsburgh, PA 15224, or to the Sligo Church of the Nazarene, 311 Madison St, Sligo, PA 16255.

Lisa D. Elliott, 49, of Rimersburg, passed away on Friday, August 21, 2020 at the West Penn Hospital in Pittsburgh following a courageous battle with Cancer. She was born on September 11, 1970 in Clarion; daughter of Dennis E. Elliott, Sr. and... View Obituary & Service Information

The family of Lisa D. Elliott created this Life Tributes page to make it easy to share your memories.

Lisa D. Elliott, 49, of Rimersburg, passed away on Friday, August...

Send flowers to the Elliott family.