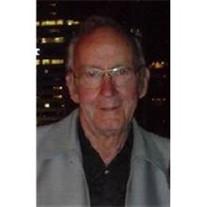 Lloyd F. Leadbetter, 83, of Kittanning, formerly of Strattanville, died on Sunday, June 1, 2014, at the Concordia Health and Human Care in Cabot. Born on February 26, 1931 in Corsica; he was the son of John A. and Pearl M. Ambill Leadbetter. He... View Obituary & Service Information

The family of Lloyd F. Leadbetter created this Life Tributes page to make it easy to share your memories.

Send flowers to the Leadbetter family.