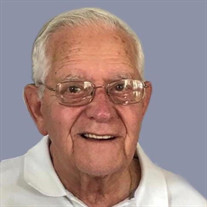 Loreno “Larry” Pierucci, 90, of Sligo, passed away on Sunday July 12, 2020 at his home following a brief illness. He was born on December 19, 1929 in Sligo. The son of the late Ralph and Louise Sanesi Pierucci. Loreno graduated from Clarion Area High School in 1948. He proudly served in the 3rd Armor Division of the Army during the Korean Conflict. Loreno was married on May 13, 1953 to Theresa Karg, whom survives. He worked for the A&P Tea Company for 32 years, during that time he also worked as an independent electrician. He retired from the Clarion Hospital where he worked in the maintenance department. Loreno was a lifelong member of the Immaculate Conception Catholic Church in Clarion. He was a 4th degree member of the Knights of Columbus and also a member of the Knights of St. George. In his younger years he loved racing go-carts and spent many afternoons polishing his cars. He enjoyed Hunting and the outdoors. Loreno took pride in his Italian heritage and enjoyed his trips to Italy to visit extended family. He loved family dinners and had a great appreciation for good food. He and his wife spent time during the winter months in Florida visiting their daughters and grandchildren. Those who knew him would say he was always kind, offer up a smile and would share a funny story or joke. He is survived by his wife, three sons, Terry Pierucci of Sligo, Tim Pierucci and wife, Cindy of Brookville, and Tom Pierucci of Sligo; Two daughters, Gina DeGirolmo and husband, Brian of Winter Garden, Florida and Maria Haseta and husband, Kenan of Lutz Florida. Eight grandchildren and 3 great grandchildren. He is also survived by a sister, Patricia Sanesi Mudrinich and husband, Daniel of New Kengington. There will be no public visitation. Mass of Christian Burial will be celebrated on Wednesday July 15, 2020 at 11:00 a.m. in the Immaculate Conception Catholic Church in Clarion with the Rev. Monty Sayers pastor presiding. Interment will be in the Immaculate Conception Catholic Cemetery. The family request memorials to Charitable Deeds, 200 High Point Road, Knox, PA 16232 or Clarion Forest VNA, Inc., 271 Perkins Road, Clarion, PA 16214.

The family of Loreno Pierucci created this Life Tributes page to make it easy to share your memories.

Send flowers to the Pierucci family.