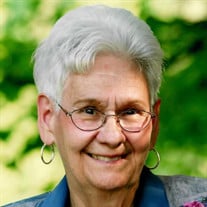 Louise H. Dechant, 95, of Clarion, passed away on Sunday, October 11, 2020 at the McKinley Heath Center in Brookville. She was born on January 6, 1925 in Limestone Township; daughter of the late William P. and Barbara J. Huefner Donahue. Louise married Raymond J. Dechant on June 28, 1944, who preceded her in death on September 29, 2002. Raymond and Louise raised their family on a 100-acre dairy farm in Mechanicville for 29 years. Louise loved to keep active and work, so she held many jobs and retired several times because she didn’t want to stay sedentary. She was a manager of the former Johnny Garneau’s Golden Spike Restaurant in Clarion. Louise also taught Food Services at Clarion County Votech and worked at the Immaculate Conception Catholic School Cafeteria. She was a life member of the Immaculate Conception Catholic Church of Clarion, where she was also a part of the Ladies Guild. Louise was a member of the Red Hat Society in Clarion. She volunteered at the Clarion Hospital for over 17 years. Louise loved to crochet. She made and gave away over 100 Betsy Ross Flags and also crocheted squares with pencils in them for the kids. She also loved to walk up to Wendy’s for a frosty and chicken nuggets. Louise proudly told the story to anyone listening about her grandfather shaking hands with Abraham Lincoln. She was an inspiration to anyone that knew her. She is survived by her eight children: Lucille Fiscus and her husband, Daniel, of Brookville, Suzanne Connell and her husband, John, of Illinois, Richard Dechant of Corsica, Linda Lander and her husband, Robert, of Lucinda, Andrew Dechant and his wife, Crystal, of Oakdale, Janet Coon of Erie, Charles Dechant and his wife, Sherri, of Virginia, and Alan Dechant and his wife, Kimberly, of Knox; 21 grandchildren; 39 great grandchildren; and 7 great-great grandchildren, with number 8 on the way. Louise is also survived by her brother: Robert Donahue of Erie and numerous nieces and nephews. She was preceded in death by her parents; loving husband: Raymond; her daughter: Lori Ann Dechant; a twin great granddaughter; a twin great grandson; her brother: Edward Donahue; four sisters: Agnes Siegel, Elizabeth Siegel, Marie Vasbinder, and Cecelia McCloskey; and a daughter-in-law: Marge Stewart Dechant. A Christian Wake Service will be held at 3 p.m. on Thursday, October 15, 2020 at the Robert V. Burns Funeral Home in Clarion. Viewing will start immediately after until 6:30 p.m. Due to Governor Tom Wolf’s Covid-19 mandate, we are only permitted to have 20% of our capacity in the building at a time. Please limit your stay inside during viewing hours so we can accommodate all who would like to pay their respects. Mass of Christian Burial will be celebrated at 11 a.m. on Friday, October 16, 2020 at the Immaculate Conception Catholic Church with Rev. Monty Sayers, pastor presiding. Interment will follow in the Immaculate Conception Catholic Cemetery.

Louise H. Dechant, 95, of Clarion, passed away on Sunday, October 11, 2020 at the McKinley Heath Center in Brookville. She was born on January 6, 1925 in Limestone Township; daughter of the late William P. and Barbara J. Huefner Donahue. Louise... View Obituary & Service Information

The family of Louise H. Dechant created this Life Tributes page to make it easy to share your memories.

Louise H. Dechant, 95, of Clarion, passed away on Sunday, October...

Send flowers to the Dechant family.