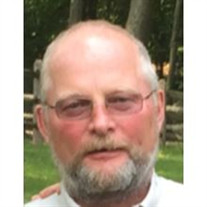 Lynn A. Peterson, 57, of Limestone, passed away on Thursday, September 15, 2016 at home surrounded by his family after a 9-month battle with esophageal cancer. Lynn was born on April 10, 1959 in Ridgway, PA; son of the late Eugene and Ruthel Peterson. He graduated from Clarion Area High School, class of 1978. After high school Lynn joined the United States Army and was a veteran of the Cold War serving in Germany on the Czechoslovakian border as a Tank Commander in the Third Infantry Division. Lynn was active in the Army from 1978 to 1982 and was honorably discharged. After his service he joined the United States National Guard from 1982 to 1989 as a Staff Sergeant. He had many declarations during his service; Army Achievement Medal, Army Good Conduct Medal, Army Service Ribbon, Thomas J. Stewart Medal, Reserve Overseas Training ribbon, Army Overseas Service, Reserve Component Achievement Medal, NCO Development ribbon, and Presidential Unit Citation ribbon for his service in the 28th Division. Lynn married Karen Babik of Johnstown on April 3, 1993 and she survives. He worked at Clarion University of PA for 31 years and retired from there as a Supervisor of the Custodial and Grounds Crew in 2013. Lynn was a member of the Servicemen’s Club of Knox, Clarion County Rod & Gun Club, Fryburg Sportsman Club, Clarion VFW, Clarion Eagles, Ridgway Elks, and Clarion Moose. He loved to fish and made many trips to Canada with his brothers, nephews and good friends. He also enjoyed hunting and breeding golden retrievers for 22 years. Lynn is survived by his wife, two daughters, Tara and Megan who are still at home. His wife and daughters were the love of his life. He is also survived by his brothers, Rick Peterson and his wife Kathy of Knox, Allen Peterson and his wife Robin of Clarion, a sister, Wanda Viselli and her husband Angelo of Strattanville, and many nieces and nephews. Lynn was preceded in death by his father and mother, a brother, Greg Peterson, a nephew, Chad Anthony, and a great-niece Laken Silvis. Family will receive friends from 1 p.m. to 4 p.m. on Saturday, September 17, 2016 at the Robert V. Burns Funeral Home in Clarion with Funeral Services and Military Honors to be held at 4 p.m. with the Rev. Monty Sayers pastor as presider and the American Legion Post 66 of Clarion. In lieu of flowers, donations can be made in Lynn’s name to the Wounded Warriors of Western Pennsylvania, 139 Mitchell Road eighty four, PA 15330 or the Clarion Cancer Center, 150 Doctor’s Lane, Clarion, PA 16214.

Lynn A. Peterson, 57, of Limestone, passed away on Thursday, September 15, 2016 at home surrounded by his family after a 9-month battle with esophageal cancer. Lynn was born on April 10, 1959 in Ridgway, PA; son of the late Eugene and Ruthel... View Obituary & Service Information

The family of Lynn A. Peterson created this Life Tributes page to make it easy to share your memories.

Send flowers to the Peterson family.