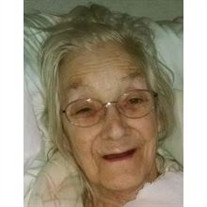 Marcella “Betz” Hook, 85, of Knox, passed away on Thursday, August 25, 2016 at the Golden Living Center in Shippenville. She was born on November 15, 1930 in Lucinda; daughter of the late Florian and Cora Griebel Bauer. Betz was married on September 16, 1950 to Ivan S. Hook who preceded her in death. She worked at Seidle’s Chevrolet as a booker keeper and at the former L & R Decorating. Betz was also a homemaker. She was a member of the Immaculate Conception Catholic Church in Clarion. Betz was also a member of the Shippenville V.F.D Ladies Auxiliary. She was an avid bowler, loved to crochet, work on puzzles and crosswords, canning, and spending time with her family. She is survived by one son, Ivan J. Hook and his wife Janis of Florida, two grandsons, Marcus J. Hook and Todd A. Hook both of Virginia, one brother, Clete Bauer of Louisiana, a brother-in-law, Allen Crise of Vowinckel, and a number of nieces and nephews. Betz is preceded in death by her parents, husband, six brothers, and one sister. Family will receive friends from 1 p.m. to 4 p.m. on Sunday, August 28, 2016 at the Robert V. Burns Funeral Home in Clarion. Funeral Services will be held at 11 a.m. on Monday, August 29, 2016 in the Funeral Home. Interment will follow at the Cedar View Memorial Park in Strattanville. Donations and memorials can be made in Betz’s name to the Clarion Forest V.N.A Hospice, 271 T-790, Clarion, PA 16214.

The family of Marcella "Betz" Hook created this Life Tributes page to make it easy to share your memories.

Send flowers to the Hook family.