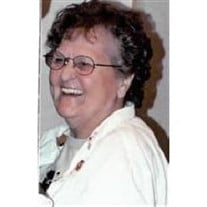 Marrion B.L. Wagner, 92, of 172 North Drive, Shippenville, went to be with her Lord and Savior on Friday, October 14, 2011, at Clarion Hospital. Born January 18, 1919, in Duquesne, PA; she was the daughter of the late John and Mary Mell Hunt. She... View Obituary & Service Information

The family of Marrion B.L. Wagner created this Life Tributes page to make it easy to share your memories.