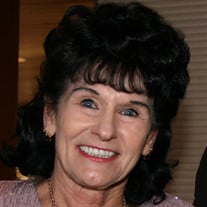 Martha J. Kerle, 78, of Rehobeth Church Road, Clarion, passed away Friday evening, February 1, 2019 at her residence. She was born on March 2, 1940, in Clarion; daughter of the late Harry and Florence Gourley McCleary. Martha graduated from Clarion-Limestone High School in 1958. She was married to James Kerle on September 14, 1979 at Immaculate Conception Church, who survives. Martha worked for 34 years at Owens-Illinois Glass Plant in Clarion and retired in 1994. She was a member of Immaculate Conception Parish and a proud member of the Republican party. The only thing that could rival Martha’s passion for the bible and politics was her generosity. She also was well known for her Christmas fudge and enjoyed making family favorites of sweet ham, deviled eggs, and macaroni salad for holidays and family gatherings. Surviving are her husband, Jim, a son, Clayton Kroh and his wife Kimberly of Clarion, a daughter, Lori Klepfer and her husband Rodney of New Bethlehem, two step-sons, Daniel Kerle of Strattanville, and Lee Kerle and his wife Melissa of Clarion, a step-son-in-law, Daniel Rhoades, and ten grandchildren: Melani Marshall and her husband Jesse, Ashley Klepfer, Amanda Kroh, Leah Kerle, Kortnee Klepfer, Brent Rhoades, Cody Kerle, Joseph Kerle, James Kerle, and Kyle Kerle. She also is survived by her brother, Calvin McCleary and his wife Penny, and two sisters, Sandy Stewart and her husband Denny, and Joyce Lutz and her husband Charles, all of Clarion. In addition to her parents, she was preceded in death by two step-fathers, John Yarger and Arnold “Jobie” Gandolfi, and her step-daughter, Stephanie Rhoades. Family will receive friends at the Robert V. Burns Funeral Home in Clarion on Tuesday, February 5, 2019 from 4 p.m. to 8 p.m. A Christian Wake Service will be held at the completion of the visitation hours in the funeral home. Mass of Christian Burial will be celebrated at 11:00 a.m. on Wednesday, February 6, 2019 at Immaculate Conception Catholic Church in Clarion with Rev. Monty Sayers, presiding. Entombment will follow at the Immaculate Conception Mausoleum. The family would like to give a special thank you to the Clarion Forest V.N.A., Clarion Hospital, Butler Memorial Hospital, and the Lung Center at Penn Highlands for their care. In the spirit of Martha’s generosity, the family suggests donations to the charity of one’s choice.

Martha J. Kerle, 78, of Rehobeth Church Road, Clarion, passed away Friday evening, February 1, 2019 at her residence. She was born on March 2, 1940, in Clarion; daughter of the late Harry and Florence Gourley McCleary. Martha graduated from... View Obituary & Service Information

The family of Martha J. Kerle created this Life Tributes page to make it easy to share your memories.