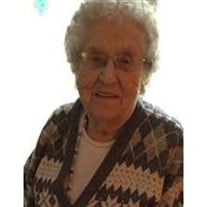 Mary Jane Mays, 88, a lifelong residence of Clarington, passed away on Tuesday morning, February 9, 2016 at the Serenity House in Shippenville. She was born on March 9, 1927 in Sigel, PA; daughter of the late Richard and Olive Brown Hagerty. Mary... View Obituary & Service Information

The family of Mary Jane Mays created this Life Tributes page to make it easy to share your memories.

Send flowers to the Mays family.