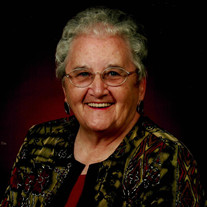 Mary L. Murray, 83, formerly of Shippenville and Strattanville, passed away peacefully on Thursday, February 14, 2019 at the Shippenville Healthcare & Rehabilitation Center, where she had been a resident since April, 2018. Born August 16, 1935 in Shippenville, she was the fourth of eight children born to the late Arthur M. and Francis M. Kurtzhals Wagner. In her early years, she was a waitress at Rhea’s Corner Restaurant and the retired as a cook from Clarion School District in 1984. Mary married Harry L. Murray of Shippenville on June 18, 1955. He preceded her in death on February 4, 1993. Harry was the love of her life and together they enjoyed traveling, camping, and meeting new people throughout the country. Mary was a very kind person who always wore a smile, especially when she was with her family, and always searched for the good in a person. She never had an ill word to say about anyone. Mary enjoyed her “fancy work”, which included knitting, crocheting, sewing, and cross stitch. Her passion, however, was quilting. She made several quilts for her children and grandchildren that they will forever cherish. Mary was a member of the Immaculate Conception Catholic Church in Clarion and formerly of St. Michael’s Church in Fryburg. She was also a member of the IC Guild, Catholic Daughters, and a past worthy matron of the Order of Eastern Star. Mary is survived by her two daughters, Charlene Holabaugh and her husband Bill and Loretta Myers, all of Strattanville, and one son, John Murray and his wife Lorri, also of Strattanville. In addition, she is survived by seven grandchildren; Carrie Miller and her husband Wylie of Shippenville, Kristin MacKenzie and her husband Travis of MacDonald, PA, Kelli Rankin and her husband Larry, Jr. of Strattanville, Bradley Myers and his wife Rani of Limestone, Angela Smith and her husband Richard of Strattanville, Jennifer Erff and her husband Greg of Royal Oak, Michigan, and Justin Murray of Stattanville. Mary is also survived by her seven great grandchildren, Landon and Lucas Rominski, Evelyn and Greyson Rankin, and Arleigh, Adelina, and Astella MacKenzie, and one step great grandson, Peyton Smith. In addition, she is also survived by four sisters; Vera Porter of Miola, Monica Callihan of Lucinda, Alma Howe of Dallas, Texas, and Frances Greathouse and her husband John of Cochranton, PA. Also surviving are three sisters-in-law; Lois McClain of Shippenville, Sylvia Murray of Springhill, Florida, and Maxine Murray of Tallahassee, Florida, and one brother-in-law, Paul Love of Mentor, Ohio. She is also survived by a special nephew and niece, Robert Porter and his wife Diane of Shippenville. In addition to her parents and husband, she was preceded in death by one brother, Jacob “Little Jake” Wagner, two sisters, Rita Gray of Toledo, Ohio and Lena Love of Mentor, Ohio and an infant grandson, Brian Holabaugh. Additionally, she was preceded by her mother-in-law, Arlie Murray Beichner, brothers-in-law, Charles “Dave” Gray of Toledo, Ohio, Harry Porter of Miola, James Callihan of Lucinda, Richard Howe of Dallas, Texas, Donald Murray of Erie, William Murray of Springhill, Florida, and Jack McClain of Shippenville. Family will receive friends from 1 p.m. to 8 p.m. on Monday, February 18, 2019 at the Robert V. Burns Funeral Home, 638 Wood Street, Clarion. A Wake Service will take place at 7:30 p.m. in the funeral home. A Mass of Christian Burial will be celebrated at 11 a.m. on Tuesday, February 19, 2019 at the Immaculate Conception Catholic Church in Clarion with Rev. Monty Sayers, presiding. Interment will follow in the St. Michael’s Catholic Cemetery in Fryburg. In Lieu of flowers, the family suggests contributions may be made to a charity of one’s choice.

Mary L. Murray, 83, formerly of Shippenville and Strattanville, passed away peacefully on Thursday, February 14, 2019 at the Shippenville Healthcare & Rehabilitation Center, where she had been a resident since April, 2018. Born August 16, 1935... View Obituary & Service Information

The family of Mary L. Murray created this Life Tributes page to make it easy to share your memories.

Send flowers to the Murray family.