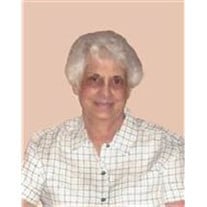 Mary Jane Spina, 92, of Highland Oaks, Shippenville, died Monday morning, April 1, 2013, at the Clarion Hospital. Born June 8, 1920 in Brooklyn, NY; she was the daughter of Vincent and Teresa Fabiano Curcio. Mary Jane was married on December 21, 1943 to Salvatore Spina, who preceded her in death on April 12, 1998. She was of the Catholic faith. Mary Jane worked as a seamstress and was a homemaker. She enjoyed sketching, painting, and knitting. Surviving are a son, Vincent Spina of Clarion; a daughter, Chiarina Chaney and her husband, James, of Las Vegas, NV; four grandchildren, John Spina of New York, Ignacio Leycegui of Las Vegas, Michael Leycegui of Los Angeles, and Maria Leycegui-Paris of Las Vegas; and two great grandchildren, Riley and Nicholas Paris of Las Vegas. She was preceded by her parents; husband; a son, John Spina; and a brother, Vincent Curcio. Family will receive friends from noon to 4 p.m. on Thursday, April 4, 2013, at the Robert V. Burns Funeral Home, 638 Wood Street, Clarion. A rosary service will be held at 4 p.m. in the funeral home. Funeral services will be held in Las Vegas, NV. Interment will be held in the Bunkers Memory Garden, Chapel, and Cemetery in Las Vegas, NV. Memorials and donations can be made to Highland Oaks, 101 Maple Drive, Shippenville; or to an AIDS foundation of one’s choice.

The family of Mary Jane Spina created this Life Tributes page to make it easy to share your memories.

Send flowers to the Spina family.