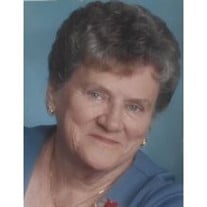 Mary Jane “Nan” Wagner, 88, of Shippenville, formerly of Fisher, passed away Thursday morning, September 15, 2016 from this life to her next heavenly life due to complications from cancer at the McKinley Heath Center in Brookville She was born on August 7, 1928; daughter of the late Charles F. and Elda Z. Kennemuth McClain. Nan was a graduate from Clarion High School in 1948. She was married on July 22, 1950 to Charles Stewart Wagner who preceded her in death on February 24, 2015. In 1972 her and her husband Stew bought a farm near fisher. She loved to can, sew, and quilt at the farm. Many people were blessed by her beautiful quilts. In 1997 they returned to the Manor area. Nan will always be remembered for her sense of humor. She worked for Sylvania for ten years, Owen’s Illinois Glass Plant for ten years, Pine Hill Personal Care Home for five years, and she also worked as a waitress at Rhea’s Corner’s Restaurant and the Modern Diner Restaurant in Clarion in her earlier years. She got her nickname ”Nan” for being a nanny to many kids throughout the years. She was a member of the Kahletown Community Church since 1979. Nan is survived by two daughters, Linda Finefrock of Shippenville and Cindy I. Miller of Clarion, three grandchildren, Kelly Johnson and her husband Rick of Derry, Angie Finefrock of Shippenville, and Wylie Miller and his wife Carrie of Clarion, seven great grandchildren Charles Tyler and Marcus Trevor Finefrock, and Logan, Gavin, Rylin, Conner, and Erin Johnston, a number of nieces and nephews, and also her cat, Sweetie Pie. Nan was preceded in death by her parents, husband, her step mother, Edna McClain, a son-in-law, Idana Finefrock, and her brothers, Albert, Kenneth, Deo, and Merle. At Nan’s request there will be no public visitation. Funeral services will be held on Saturday, October 15, 2016 at 1 p.m. in the Kahletown Community Church, Sigel, PA with Rev. Clyde Fitzgerald pastor. Burial will take place in the church cemetery. The Robert V. Burns Funeral Home in Clarion is handling the arrangements.

Mary Jane &#8220;Nan&#8221; Wagner, 88, of Shippenville, formerly of Fisher, passed away Thursday morning, September 15, 2016 from this life to her next heavenly life due to complications from cancer at the McKinley Heath Center in Brookville... View Obituary & Service Information

The family of Mary Jane Wagner created this Life Tributes page to make it easy to share your memories.