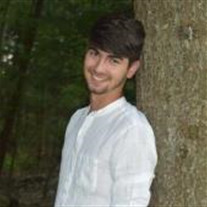 Mason Lewis Burns, 18, of Clarion, passed away unexpectedly on Wednesday, December 12, 2018. Mason was born on April 15, 2000 the son of Robert V. Burns, Jr. and Susan A. Schmader, both of Clarion. He was currently enrolled as a student at Slippery Rock University, where he was pursuing a degree in chiropractic medicine. Mason was a 2018 honors graduate of Keystone High School, where he was well known for his talents on the stage, having been an active participant or lead in six musicals. He was a member of the Concert Choir, the Concert Band, the Marching Band, and the Select Ensemble. Mason was recognized for these achievements by receiving the 2018 Arion Award and the 2018 Musician of the Year Award from the Keystone Music Association. Mason was also a member of the National Honor Society, and was a Rotary Youth Leadership Award winner in the summer of 2017. Mason was equally at home, in the classroom, on the stage, on the track, or in the pool. He was a spectacular swimmer who swam for the Clarion River Sharks and the Franklin Flyers with the YMCA and as an independent swimmer representing Keystone High School. Mason was baptized and confirmed into the Holy Trinity Lutheran Church at Shippenville where he was a member of the choir, and was also active as an altar attendant at Christ Episcopal Church in Oil City. Mason was a member of the Edenburg Lodge F&A Masons in Knox. He bartended at the American Legion Post #66 of Clarion. He had a smile that was infectious and he took great delight in making those around him smile and laugh. Mason enjoyed working on the farm with his father and spending time with his family and friends. He is survived by his parents, Robert V. Burns, Jr. and Jennifer Criner of Clarion and Susan A. Schmader and her husband Howard also of Clarion; his grandparents, Bob Burns of Myrtle Beach, SC and Art and Marie Eshbaugh of Shippenville; his aunts and uncles, Becky Shick and her husband Rocky of Rimersburg, Rollie Burns and his wife Tammy of Clarion, Debra Irwin and her husband Randy of Grove City, Patricia Rowe and her husband Kenna of Shippenville, and Heidi Piper of Colleyville, TX. He is also survived by his step-siblings, Benton and Maci Reichart; his cousins, Catherine "C.J.", Jacob, Amanda, Brody, Alissa, Shaley, Lexey, and Anna; his fur babies Miya, Crosby, and Izzy; and his best friend Rachel Riley; along with a huge extended family and numerous friends. Mason was preceded in death by his Nana and an uncle, Curtis Piper.

Mason Lewis Burns, 18, of Clarion, passed away unexpectedly on Wednesday, December 12, 2018. Mason was born on April 15, 2000 the son of Robert V. Burns, Jr. and Susan A. Schmader, both of Clarion. He was currently enrolled as a student at Slippery... View Obituary & Service Information

The family of Mason L. Burns created this Life Tributes page to make it easy to share your memories.

Mason Lewis Burns, 18, of Clarion, passed away unexpectedly on...

Send flowers to the Burns family.